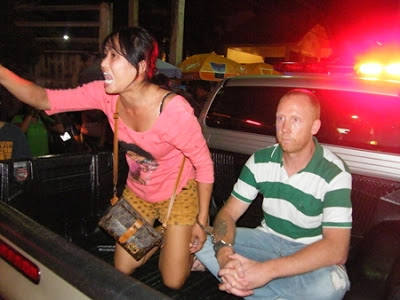 A SWEDISH VIEW OF THAI JUSTICE

A journalist on a Sweden’s biggest newspaper Aftonbladet has just described one of the ugliest days in court he has ever seen. He was actually talking about an up suburban court in Stockholm, Sweden but the case was one of murder and it happened in Pattaya.


Problem was of course that the evidence was provided by the Thai police.

On trial was Andreas Ringvall, a Swedish sailor with a previous record charged with the murder of New Zealander Robert Hollick in Pattaya in 2012. He alleged stabbed Hollick to death in a frenzied attack after a row began when Hollick entered the bar Ringvall was drinking in with a boisterous dog. It was premeditated because after the initial argument Ringvall returned with a knife.

The case seemed cut and dried. There were witnesses, and a murder weapon and an arrest was made very quickly.

But then Ringvall entered the court system. He was given bail at the rate of Bt500,000 and then for a sum not disclosed as given permission to return to Sweden for a family visit.

Not surprisingly he did not return. Eventually the Office of the Attorney General in Thailand was forced to make a groveling apology for his release – not something the Pattaya seemed too concerned about. The sugar cane had after all entered the elephant’s mouth.

Intranee Sumawong, Director of international affairs at the office of the Thai attorney-general, said:

“I really would like to send a message to [Hollick’s] family that we are very sorry about the situation.

We feel responsible and, as the public prosecutor of Thailand, I will do my best to make sure justice is done in this case.”

Thailand does not have an extradition treaty with Sweden. So Swedish prosecutors, aware of the publicity surrounding the case and pressured by the Thais, eventually decided to prosecute themselves.

“I’m pleased, relieved a bit, because the thought of him living as an ordinary Swedish citizen, just living his life like nothing happened .”

The Dominion newspaper had run a campaign chasing the Thai authorities to do something.

Anne Hollick spoke to soon. As the Swedish case was based on the Pattaya Police investigation it fell far below international standards.

The post mortem was ‘amateurish’. This may be because it was written by a policeman not a doctor. The scenes of crime evidence were not existent. The murder weapon had been lost. Thai witnesses summonsed by the prosecution demanded large sums of money so their testimony was barely credible and the Thai interpreters were dodgy too apparently.

Ringvall just got eighteen months for aggravated assault and manslaughter.

Writing in Aftenbladet last week columnist Oisin Cantwell said: “I left the beautiful court building, looking out over Riddarfjärden and found myself thinking that I never want to see something like this played out in a Swedish courtroom again.”

The prosecutor admitted there were shortfalls in the Thai investigation.

Swedish blogger Jan Kallman said he totally agreed with Oisin but it was the corrupt Thai justice system which was to  blame.

“It has to be understood that criminals who come to Thailand and hide come with the knowledge that it is possible to bribe their way in the legal system.

“ All people who are innocent and honest should avoid the police. If you see Khun Kling & Klang on the way to a traffic accident or crime scene where you yourself are, just run AS fast as hell from there. Never stand up as a witness – it can end with you being charged with the crime.”

And the moral is: If Drew Noyes turns up in court today to hear his appeal against a jail sentence for extortion, then he the result has been decided and he will shortly be conducting legal seminars with the local judges again.