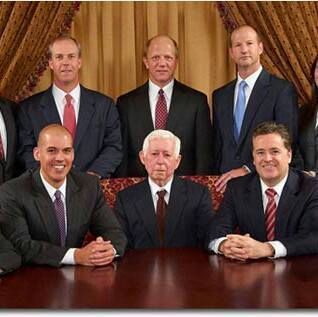 Convicted extortionist and conman, Drew Noyes has been overstaying in the United States having graciously been given bail by Pattaya court after being convicted and jailed for two years for extortion, now appears to be claiming to be a lawyer from Tampa, Florida.

He has started a new Facebook site‘ Lawyers’ after finding out that some guy called Robert Russell has been attacking him on his own sites.

Using a photograph taken from the internet page of Lawyerdaily.net ‘Finding a good lawyer in Tampa’ he waxes on lyrically.

“Comments by someone posing as “Robert Russell” have been deleted from this site. Facebook has been contacted as well as the individuals to whom the derogatory comments were addressed. We have investigated the claims and found that the source of the information relied upon was from a person named Andrew Drummond.”

What? Heaven knows why I would post or even have the time to post as Robert Russell on his sites when we have a capably good site here in which we have frequently referred to this man, who was first exposed in the Wilmington Morning Star 20 years ago, as a complete fraud and cheat and for which we have never been sued. 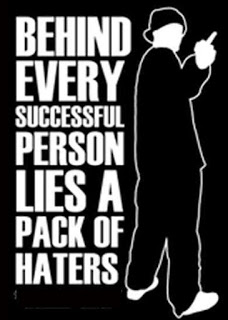 Facebook I suspect will point out to him that as the comments were on his site it was up to him to police them.

On his Facebook site ‘Best Pattaya Lawyers’ Noyes answers critics with the illustration on the right. He writes:


However, it also attracts a few of those foreigners so rotten they are unwanted and desperate to be noticed so they unfairly lash out at well-known foreigners.


These misfits are hiding behind false names on the internet! Ignore them.

He has created some 20 websites to dry and drown out this one. But it clearly isn’t working.

I’m not sure what the Florida law firm will think about using their picture – but here below is the latest picture of Drew Noyes, who falsely claimed to be a lawyer on the internet and his ‘Pattaya One Stop Service Center’.

Clearly the nine lawyers and an equal number of bilingual para-legals he claims to employ appear to have gone – as has the Managing Director, his wife Wanrapa Boonsu, who together with him was jailed for two years at Pattaya court and is on bail awaiting the result of the appeal set for October 22nd. Also not present is Naam.

Considering he selected the picture he looks very unhappy about it.

Drew Noyes further claims the Thai authorities have informed him in writing that this site has been blocked in Thailand because Drummond has multiple fugitive arrest warrants out and issued as a result of additional crimes he has committed.

That’s interesting. I would like to see that letter. He seems to have more of an ear to the government that the Foreign Correspondents Club of Thailand. He is somewhat exaggerating.

In relation to Noyes I have one conviction of libel and that is for allowing a poster to post that Drew Noyes and his colleague David Hanks were pimps and that’s in a Thai court in a sex resort.

In fact Hanks is documented as the former owner of the Masquerades brothel in Melbourne and Noyes arrived in Thailand to run the Zebra and Lollipop bars in Pattaya.

As Thailand, and particular civic authority in the sex resort of Pattaya maintains there are no establishments where sex is offered commercially it is somewhat difficult to prove to the satisfaction of a Pattaya court that Noyes was a pimp – though of course he was.

I have not been sued successfully yet for anything else I have written about Noyes.

That is not bad a bad result considering we have accused him here of cheating customers over their divorces, selling Thai National Housing Authority Housing built for poor Thais to foreigners, pocketing customers cash given in trust to pass on to others, sexually harassing women, faking membership of MENSA, child sexual abuse, flogging property that did not belong to him, offering press cards and shares in the Pattaya Times and work permits for cash.

But he has now resorted to suing for pictures I have published lampooning him; as has his stablemate Brian Goudie.

I have not bothered even to attend those cases which Reporters refer to as SLAPP cases. They are merely taken to waste time and money.

And I have readers of this site to thank for their generosity in helping fund the cases.

Any outstanding cases for lampooning pictures such as this below can wait until I return.

By then of course these people should be in jail. Goudie for posing as a lawyer and officer and gentleman to cheat an old lady out of in the region of US$300,000, and Noyes and Boonsu for the extortion of the Thonglor Clinic, Jomtien.

But this is Thailand and worse, this is Pattaya. So don’t plan any celebrations.

Footnote: I am happy to announce that the latest person to be set up by Drew Noyes with the help of Pattaya authorities, former Stowe College and Birkbeck College, University of London student Thor Halland, has been released on bail.

He was set up on charges concocted by Drew Noyes and French man Lauren Thierry.  Lauren Thierry was a former partner of Ivan Schiffer, who ran a therapeutic oil business and also helped out Drew Noyes at the Pattaya Times newspaper, which we successfully ran into the ground. 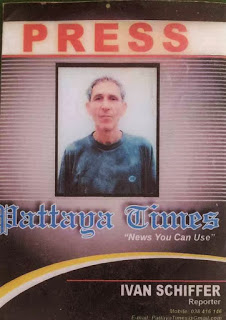 When Schiffer warned an American former schoolfriend of Noyes, that Noyes was stiffing him Noyes reported him to the Immigration Department for overstaying his visa. Schiffer left for Cambodia to renew his visa bringing with him the Bt20,000 fine normally imposed for long overstays at the border.

It was refused and Schiffer was deported to Brazil. He has now returned legally.

Thierry then  took over Schiffer’s equipment and business – and never gave it back. Since his return however Schiffer, the qualified chemist started up again and was putting Thierry out of business by reports received here.

Thor Halland was on the winning Birckbeck College team on the BBC’s University Challenge in 2003. But of course Noyes claims he is a member of MENSA.

Below Noyes’ One Stop Video of Thierry

Drew Noyes has given an undertaking to a Pattaya Court that he will return to Thailand tomorrow September 1st and present himself to the court on September 4th. He told the court he was sending his children to the United States for their education.