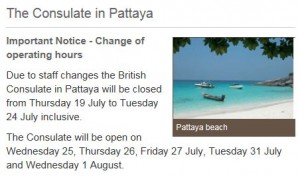 Gordon Bennett!  The British Consulate in Pattaya – once dubbed the world’s busiest – will be holding some erratic opening hours until further notice due to the resignation of the Thai born current Vice-Consul.

Leela Bennett, the big cheese in Pattaya, it is understood, wished a transfer to the quiet backwater of Bangkok but there were no vacations vacancies available, so she has packed it in.

This will come as sad news for many Bangkok Brits who discovered that it was often quicker to hop on the Bangkok-Chonburi motorway and go to Pattaya rather than brave the rush hour traffic in Bangkok and get to the Consulate before it shuts up.

They could also stay the day
in Soi 6 ‘playing golf’.

Those that do get up at 5am in Bangkok find when they get to the Embassy they have already been beaten to it by a nearnderthal band of shoppers seemingly awaiting the opening of the New Year Primark sale.

When one actually gets to the bullet-proofed gatehouse one is greeted by a Thai member of staff  who personally vets arrivals and will often announce the equivalent of: ‘The computer – he say no!’

Cocking one’s ear one can often hear laughter of consular officials inside, who are of course all high on ‘E’ and who get to watch it all on CCTV and laugh loudly at the prols outside.

The only solution I can offer is for happy drunks to get one of those temporary Sukhumvit bar owners (who open up at their roadside stalls anywhere 11 pm and stay open until the last customer leaves) to go and set up outside the mission and plonk their seats on the pavement at 3 am, first tipping the ‘diplomatic protection’ cops asleep in their car by the gates.

(One can get one of the drinkers to endorse a photograph if that’s what one needs.  They will feel like they have known you for years and they are all JPs, SAS,  company directors, prison officers, London cabbies).

I tried the towel on the sunbed trick once, but both went missing. This is probably because the Swiss Embassy is nearby.

On arrival in the Consular Section however gone are the old queues of former years. Its magnificently peaceful.

So peaceful in fact and so good are the acoustics that one can hear in graphic detail Johnny Brit explaining how his Thai wife walked off with his house, car, kids, hip flask, etc and was now living in London with a Transport Police officer of West Indian origin, having returned to ‘the game’ leaving  him penniless in Nakorn Nowhere with a family of ten to feed that he barely knew and that he wanted her residence permit cancelled ‘cos its a f…..g liberty!’**

The British Consulate in Pattaya  was re-opened to a fanfare of publicity in March*, attended, god knows why, by lots of local dignitaries***. I guess they think Britain has entered into diplomatic relations with Pattaya.

But from now on  its opening schedule seems a bit erratic and from August 6th will be open three days a week for two and a half hours a day. Going to the Consulate will be a bit like guessing the wife’s ‘safe period’ – something I have failed at consistently.

One also has to check the FOREX before requiring Embassy services – the highest charges of all the Embassies in Thailand – I believe… until I am corrected.  Currently they are paying 50 baht to the pound. You’re a penny a quid up at the moment.

The Pattaya Consulate has been closed since last Thursday and next opens on Tuesday. For an indefinite period the consulate will be only open Tuesdays, Wednesdays and Thursdays from 9 am – 11.30, so they can have 30 minutes to psych themselves up for lunch, and will be operated by staff by officers from Bangkok.

This may still be quite difficult for Pattaya Brits who tend to rise after mid-day and never know what day of the week it is anyway.

I thought perhaps that if consular officials had bothered to make the trip they could perhaps open in the afternoon too. Go on make a day of it! But it is possible their afternoons are required for visiting, morgues, prisons and hospitals, completing paperwork. Maybe they have to stop under the ‘over-servicing’ rules. Maybe they rent out the consulate ‘short time’ in the afternoons.  Maybe of course they deduct two hours travelling time each way so they are back in Bangkok before knock-off time.

I cannot provide a clue to the latest resignation. But I am guessing it may be to do with the fact that Brits are a bit more direct with civil servants, and their language may be more colourful in Pattaya,  whereas Thais have an in-bred respect for authority and have more of the ‘I know my place’ demeanour about them. Perhaps the Vice Consul never wanted to be in Pattaya in the first place.

However both systems are similar in one respect.  The angrier you get the further back in the queue you go, despite clutching ferociously on to your  numbered ticket.

Outgoing Ambassador Asif Ahmad was in the resort last week to say good-bye to an official who did not turn up.  This is a typical diplomatic manoeuvre to help get rid of the petty cash float before the new Ambassador gets his hands on it.

Meanwhile some people down in Pattaya seem to be almost pining for the two previous consuls Howard Miller and Barry Kenyon who are either writing books about their experiences or preparing for their next starring television appearances.

Anyway to the right is one of my favourite letters to ThaiVisa.com. Here’s a guy who has either directed a robbery badly because he is ‘crap’ at it and now needs a getwaway passport,  or has been robbed himself and is now seeking assistance to find the consulate in Pattaya.

(He actually does get a lot of advice but the best piece I guess is to check the Embassy website to see if the consulate is actually open, and to look at the prices for consular services)

If he can’t afford the bus fare – no way can he afford a passport or temporary travel document.

* Actually the Consulate opened in January but official opened in March. Readers should not take this story seriously. No offence is intended. It is not seriously suggested that H.M. consular officials take Ecstasy.

Cocaine is much more the drug of preference.

** With a couple of alterations a true story.

TRAVEL ADVISORY
We advise British citizens, and everyone else for that matter, not to travel  to the United Kingdom up to and around an event known as the Olypmic Games. This is due to industrial action by the U.K. Border Agency, whose officers will be replaced during this period by staff of the ACME Cleaning Company who have the contracts with the British Airports Authority, with special security skills acquired while  hoovering over sleeping transit passengers during the small hours.
While the British Government has every confidence the situation is being handled and under control, immigration queues may lengthen due to security consderations and time for processing may increase from 10 to 12 hours for UK citizens and up to 72 hours for Non-EU nationals.
Disposal units will be placed in key locations to accomodate, semtex, c4, and small nuclear devices, and use of these boxes is encouraged to ease the burden of staff.
Ticket touts will be on hand to buy the tickets for the opening ceremony which you will of course miss – at cost less 50%
Free coffee will be provided and a commemorative  FREE witty T-shirt will be issued available in XXL in peach colour.  It has the motif in black-
‘ I paid US$10,000 for a seat at the London Olympic’s Opening Ceremony and all I got was this lousy T-shirt’ –  thought up by Ena from Neasden.
On the back: ‘Screwed in Britain by the UKBA’ – above the UKBA logo Two Rottweilers Rampant.
Entertainment will be provided by repetitive playing of the television documentary series ‘The Underground’  – an introduction to London currently being shown on BBC Entertainment Worldwide. This programme, developed with the British Tourist Authority, through ten excruciating episodes will introduce you to the rude, drunken, fare dodging yobs, using the London transport system and broadcast the views of such people as a Polish worker  who says: ‘I thought England was the land of gentlemen but &%#@*!’.