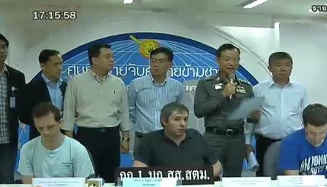 July 1 -2012
A young Briton, who was arrested last month in a police raid on a Bangkok ‘boiler room’, has been found dead in custody in the Thai capital.

Foreign Office officials said they were liaising with the man’s family ‘at this difficult time’ but have declined to give details about where the incident occurred only that he was ‘in custody’.

The man was named as Richard Ian Cook, aged, 28.  He was arrested with two other Britons Neil Stovell and Peter Carroll at a ‘boiler room’ or ‘scaml share trading operation’, on June 20th in Bangkok Sukhumvit Soi 26. He died three days after his arrest but no announcement was made.

The British Embassy confirmed the arrest but were not releasing where it happened, which is unusual.

Pol. Maj. Gen. Pisit Pisutsak, Deputy Commissioner of the Royal Thai Police  said they acted after: “British authorities have informed us that a retired army officer killed himself in desperation at his lost savings to telephone scammers working out of Bangkok.”

After the arrest of Cook and his colleagues Police Lt-Gen Wiboon Bangthamai, commissioner of the Immigration Bureau, said the three suspects were calling countries such as England, Switzerland, Germany, Sweden and Austria to convince the victims to transfer their money to a bank account opened in Switzerland.

The money was then transferred to Kuala Lumpur and brought to Bangkok as cash.

Richard Cook has been described as a person ‘suffering from depression’ and ‘not doing well with his bosses.. He was originally taken to Thonglor Police station in Bangkok and remanded in custody at Bangkok South Court for remand to Bangkok Special Prison.  Nobody at the prison was available for comment. But there is no confirmation that he even reached there and a police spokesman at Thonglor police station said no foreigner had recently died on the premises.

All suspects are only minor players and have so far only been charged with working illegally and breaching visa regulations, and despite Thai police claims that they will be prosecuted to the ‘full extent of the law’, they are expected to be deported.

Above – scene from the Hollywood film ‘Boiler Room’ with Vin Diesel

When a similar raid was conducted on a boiler room in Thonglor Soi 25 in 2009 all four Britons, two Filipinos and a Frenchman were arrested and then later deported.

No serious charges were brought against their boss, referred to as the time as a Briton called ‘Paul’.

The Britons were named as Tim Zilinsky, Lisa Barnes, and Caroline Helen and Peter Thomas.