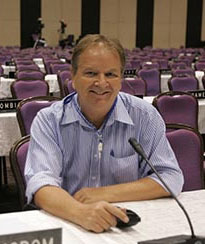 Tomorrow Saturday May 26th is D Day on attempts by Drew Noyes, publisher of the Pattaya Times, who has been joined by Niels Colov, publisher of the Pattaya People, to block this site from viewers in Thailand. So now I have to step back on reporting this issue and let a colleague journalist take over. On Monday the battle resumes again in the criminal court in Bangkok where I am presenting a case against Drew Noyes. Meanwhile thanks to all those who have generously supported me. Unfortunately legal bills stack up in Thailand so the fund is very low now. So please to those who kindly said they could help again this is the time. See at the end of  this story.

The publishers of the Pattaya Times and Pattaya People newspapers have sought a court order demanding that Thailand’s Ministry of Information and Communication Technology block www.andrew-drummond.com  from viewers in Thailand.

The move follows investigations by Drummond which exposed the publishers as men of questionable background.’

Drew Noyes,56,  the American publisher of the Pattaya Times, claimed Drummond, had a history in the United States of being pursued by lawyers for bogus share dealing,  property scams, and assaults on women.  Several cases were outstanding against him when he fled to Thailand.

He had been exposed by the Wilmington Morning Star in North Carolina as a man of ‘myriad lies’ before arriving in Thailand, claiming that he had been invited under ‘royal proclamation’ to help the country out of its financial woes, said Drummond. But his first job was to open beer bars in Pattaya where women could be bought off premises for a £10 fee.
Drew Noyes has recently been arrested on a charge of extortion. Its alleged that he and his ‘wife’ Wanrapa Boonsu attempted to extort 7 million baht (£141,000) from the Australian owner of a clinic in Jomtien, Pattaya, on pain of bad publicity in his newspaper.

Dane Niels Colov, 64, publisher of the Pattaya People, wrote Drummond, had in a previous life been a pimp in Copenhagen and had been convicted and sentenced to a jail term for living off immoral earnings, assault, vandalism and handling stolen goods. He continues to associate with career criminals from Vesterbrogade, Copenhagen’s former red light district, claimed Drummond, who reproduced pictures of the meetings on his site.

Both men are also being sued for criminal libel in the Thai courts. Noyes is being sued by Dutchman Andre Machielsen, a former friend, who has Thai citizenship, for alleging that he was a drugs trafficer,  and Colov is being sued by Australian Trevor Dick of Indo-Chine, a property company which the Pattaya People campaigned against in what is alleged was a far from transparent manner.

An earlier case against Drummond had been dismissed but has now been re-submitted.

Drummond, 60, from Edinburgh, has been publishing the investigations under the name ‘Flying Sporran’.

He is a former News of the World journalist, who quit during the Wapping industrial dispute in 1986, moved to Thailand from the Observer in 2000, and was the registered correspondent of the ‘London Times’ until 2010.

He widely freelances for most of the UK national press and has made documentaries for the BBC, Granada, Observer, (where he SE Asia correspondent and then joint founder of the paper’s television arm), Channel 4,  ABC Australia’s ‘Four Corners’,  LWT & World Monitor TV.

He said: “ I am cautiously optimistic. I am cautious because Noyes has put up on his website pictures of himself dining with Pattaya judges and also posted a story saying he is writing a book with the chief judge to expose me.  It does not get more surreal than that.
“But then again Britain has had a few controversial publishers over the years!”

He has been supported in his fight against the publishers by followers of his site who have been donating by Paypal.

Above – what Drew Noyes has been writing in his ‘Pattaya Times’

Andrew Drummond writes: Wow. As anyone who has done it knows, going through the Thai courts is a debilitating business but of course we will win no matter how long it takes. Funds are low mainly due to more and more translations having to be done and while this case and two criminal cases have been taken care of, the decision now is do I take Drew Noyes and Wanrapa, as publisher and editor, to the civil courts to try and get back all the money we have spent and more or let it lie? If I do ,I am going to have to find 200,000 baht from somewhere. If I win of course I might be awarded millions. But then again does he have it? Or will he have it by the end of the proceedings. I would say to benefactors, well I could give you a 100 per cent return on your cash but then again they might have as much chance of getting their cash back as the punters who have invested in the ‘Penguin’ in Phuket. Your views appreciated as always.

If anybody can help like last time please please do. You can pay by Paypal or in Thailand direct to my Bank of Ayudhya account. Small amounts really add up!