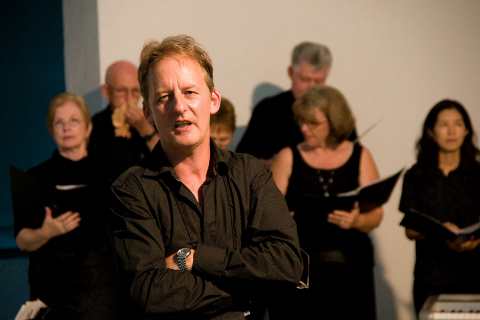 A 23-yr-old member of the Akha hill tribe in Northern Thailand has been sentenced to life imprisonment for the murder of British music teacher and composer David Crisp.

David Crisp with the Spirit House singers
Awe Ye Piang, was sentenced by the Chiang Mai provincial court in Northern Thailand, but two other hill tribe men who were involved have still not yet been caught.

Crisp, 56, originally from Derby, but more recently a popular teacher and head of music at  Lasswade Seconday School in Bonnyrigg, Edinbugh, was murdered last year for the equivalent of ?100 and a few personal belongings such as an electronic keyboard and television set.

On his arrest  Awe Ye Piang had said Crisp has upset him and his colleagues by complaining about their dirty habits such as not doing the dishes. The three young men had been staying at Crisp’s house for several days and had been working as ‘hosts’ at a gay bar at Chiang Mai Night Market.

Police Captain Phanudet Booruang said police, with the help of Border Police officers, had tracked down Awe Ye Piang, who had fled to Burma.  He was arrested as he crossed the border back into Thailand, opposite the Thai settlement of Mai Chan.

‘Awe Ye Piang, who had a history of involvement with drugs, was arrested on a warrant issued by Chiang Mai court. He quickly confessed to the murder.   On the day before David Crisp’s body was found he had made many calls to the composer.’

He said that all three men had stayed together at David Crisp’s house for six days. But Crisp  became angry and criticised them for eating but not cleaning their dishes, and making a mess of his house.

Awe Ye Piang demonstrating his role in the murder
‘This in turn made them very  angry, and they plotted together in a room at the back of the house to kill him.  Awe Ye Piang says that they opened the door to his office and saw David Crisp sitting at his computer with his back to them.

‘Jack ran towards Mr. Crisp and stabbed him in the neck. John hit him over the head with a teak vase.  They took away 13 items of his belongings, which included a television and DVD player, camera and a watch, and his safe and loaded them into is Citroen M20. We found Crisps belongings at Awe Ye Piang’s address. They later abandoned the Citroen which we found.

‘When they opened the safe they found only 5000 Thai baht (approx ?100) which they split
‘Afterwards all three men went drinking at the Lillawadee Restaurant in Chiang Mai.’

David Crisp, a musician and composer in his own right, moved to Thaland after his retirement two years ago. In Chiang Mai he was a popular member of the expatriate community and conducted a group called ‘The Spirit House Singers.’