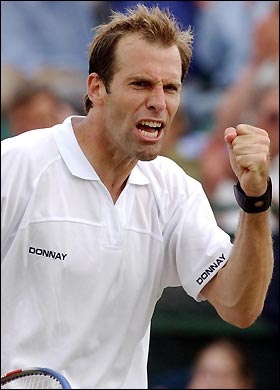 Two former British tennis champions are going to court over a Ãƒâ€šÃ‚Â£725,000 investment one made to the other in a multi-million pound project  for a so called ‘Millionaires’ Row’ on the Thai holiday island of Phuket.

Lawyers Carter-Ruck in London have issued  High Court writs against Lloyd, 63, who captained the British Davis Cup team and was Britain’s most successful tennis player  of the 70s & 80s.

Rusedski , 38, former British No. 1, and his wife Lucy invested in Jomchang 2, now known as Cape Sawan,  a ‘signature’ development of properties on Phuket’s west coast in an area dubbed ‘Millionaires’ Row’ by the local media.

Glossy brochures and videos positively glow about the development but no houses have been built while the properties are being offered ‘off plan’.

A cascading waterfall would bisect the development which would include a carp pond.  Villas would be nestled among frangipani trees amid a mesmerizing light created by their design, says the blurb.

Artists impression Cape Sawan with ‘floating beach’
‘They say you should always buy ‘blue chip’. Such land will never lose its value,  I don’t believe there is any doubt about this. Villas at the very top end have been by far the strongest segment of the Phuket property market throughout the last few years, of a slower world economy. There is still much activity and the pace is picking up,’  adds Mr. Lloyd himself.

Cape Sawan (below) between Patong and Kamala still remains little more than a rather barren hillside with no beach at its foot. (To compensate the ‘Signature homes’ would have a floating beach open all year round, except during the monsoon)

And to Rusedski this is all seems just a pipe-dream.  He claims that Lloyd has also failed to disclose documents, or accounts, showing what has happened to the money, and has failed to return it, they claim.

Left: Cape Sawan one of the last bits of available land on Phuket’s west coast.
Rusedski claims that Lloyd’s response to a solicitor’s letter has been seriously deficient, and one item was provided in the Thai language without any accompanying translation, according to a High Court writ.

Another document claimed to be a loan note issued by the Rusedskis to David Lloyd Asia Co Ltd, which Lloyd claims is a British Virgin Islands company, and also the vehicle used for the project, the writ says.

Greg and Lucy Rusedski strongly deny that they agreed to make a loan to a company called David Lloyd Asia Co or the agreed the repayment terms set out in the loan note and are now seeking court orders for an account of how Lloyd has used their money, and information and documents. They are also demanding an account of profits, and payment of any profits, as well as repayment of Ãƒâ€šÃ‚Â£725,743.20 they invested plus interest.

The Mail on Sunday has reported sources close to David Lloyd, whose company David Lloyd Resorts also manages properties in Turkey, Cyprus, Spain and Canada, as saying: Back in 2008, Greg approached David when they were playing golf and said he wasn’t making any money from tennis any more. So David suggested that he invest his money in this property deal as a way of making money. But after investing his money, Greg became panicky about it, so his investment was turned into a loan which he will get back as soon as the villas are sold.’

Lloyd’s failure to deliver was put down to the financial crisis and political troubles in Thailand.

And the newspaper quoted a spokesman for Mr Lloyd saying: ‘Mr Lloyd is astonished and personally disappointed that Mr and Mrs Rusedski have instigated this spurious and opportunistic claim.’

Currently more than 20 property companies are going through the courts in Phuket facing charges relating to the abuse of clients’ money.  In other countries many of these cases would be considered criminal. (There is no suggestion that has happened in this case)

In fact the high end property market suffered a collapse prior to the recession from which it has never fully recovered.  Many estates on the island have not been completed and several new owners have had to live on virtual building sites because the developers have not had the funds to complete.

There have also been reported threats of violence against people who have complained.

David Lloyd’s site at Cape Sawan is particularly affected because real estate agents on Phuket are finding it increasingly difficult to sell these  sort of properties off plan, such is the trust in the business and market.
Foreigners also cannot own land in Thailand and complicated  leasehold contracts have to be drawn up valid for not more than 30 years at a time.

Property people on Phuket are reluctant to be quoted negatively about the island’s decline but one did describe the situation as ‘rather sad’.

David Lloyd ‘Recession and political problems’
There is no suggestion that that has happened in this case.
The British Embassy advises caution when buying property in Thailand and more recently in relation to Phuket Britain’s Ambassador Asif Ahmad warned: ‘Development on Phuket needs to be controlled otherwise tourists will go elsewhere.’

On a visit to the Thailand he warned the local governor that more also need to be done to scams perpetrated on British tourists, which included everything from extortion rackets to basic taxi rip-offs.
Mail on Sunday article