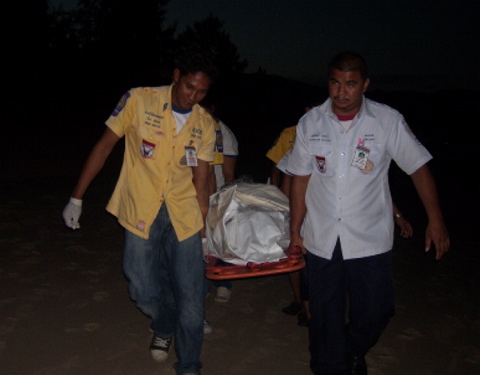 Wedding celebrations for a British couple on the Thai holiday island of Phuket turned to tragedy today after the body of a guest was found washed up on one of the island’s beachesThe body of Briton Daniel Medhurst, 27, believed to be from Ashford, Kent was found washed up on Bang Tao Beach, Phuket, the morning after he had attended a ‘stag’ stag party.A British consular official was providing assistance.

Medhurst was among a group of revellers attending a party at a ‘reggae’ bar on the beach some 500 yards from their hotel the ?120 a night Best Western Allamanda.

Heading back to their rooms in the early hours six guests decided to take a swim. But when Medhurst did not return his friends raised the alarm with security guards at the nearest hotel – the Banyan Tree.

Medhurst’s body was recovered at 5.30 am today and taken to the morgue in Thalang, Phuket.

The engaged couple had taken a honeymoon two week prior to their marriage planned for tomorrow. They have not been named.

In a separate incident a Briton was reported injured and a Swiss woman was reported killed when an elephant went on the rampage in Khao Sok national park Phuket.

The incident happened when three couples, British, Australian, and Swiss were on an eco trip riding elephants through the park.