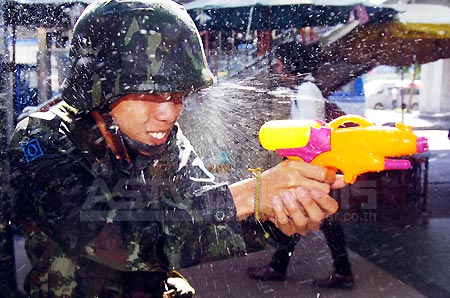 A leader of the red-shirted army of embittered Thai ex-Premier Thaksin Shinawatra today announced an end to the protest which brought holiday chaos to the Thai capital.

With the red-shirted army in complete disarray in Bangkok today and cornered around government house, Veera Musikapong, one of its five leaders announced: ‘The protest is over’.

He added: ‘But that does not mean we have surrendered.  We do not want any more of our supporters injured.’

Buses were laid on by the government to take the protesters home. Musikapong urged supporters to head for the northern bus terminal and be careful.

Then together with other protest leaders he surrendered himself to Police Commissioner-General Pol Gen Phatcharawat Wongsuwan, Thailand’s police chief.

With the exception of Thaksin Shinawatra all the leaders were all in the bag.

The announcement came after the number of supporters of the so-called ‘Democratic Alliance Against Dictatorshop’ which last week topped 100,000 had dwindled to just two or three thousand.

Overnight they had disappeared in droves. Many looked anxious as they left the barricades, abandoning their red shirts, hats and scarves.

As thousands began their return  to the North Eastern provinces, the current Prime Minister Abhisit Vejjajiva, a school chum of Boris Johnson, can claim a major political victory.

Almost miraculously there have been only two deaths in two days of fighting in the streets of Bangkok, and neither of them was inflicted by government forces.

The two fatalities came when red-shirts clashed with market traders at the city’s Nang Lerng market.  And one of them a 53-yr-old man was shot dead by a Thaksin supporter.

Today is a black day for Thaksin Shinawatra , who commanded tremendous support from the poor people of north east Thailand , whose voting power alone can pull down a government.

For over a week he had urged his ‘red-shirts’ to converge on Bangkok and bring the government of Eton and Oxford educated Prime Minister to its knees.  For a day it looked like they were winning as they stormed a conference of ASEAN ministers in the resort of Pattaya, causing them to flee back to their home countries.

Egged on by their success, the red-shirts then marched again on Bangkok gathering over 100,000. As tourists were urged to leave, and the British Government advised travellers not to come to Bangkok, the situation looked grim.

But 43-yr-old Prime Minister  Abhisit Vejjajiva , who himself was hit with by a flying brick, hastily called police and army chiefs together. Yesterday the army moved in destroying barricades and sending protesters fleeing  by firing volleys of predominantly blank shots.

Today, despite complaints by Thaksin, best known in Britain as the one time owner of Manchester City Football Club and known to fans as ‘Frankie, that the Army had fired real bullets and that the army had ‘hidden’ the bodies, there appeared little evidence to back his claims.

He had described the crackdown as brutal. But many found irony in the remarks made by a former Prime Minister who has been widely condemned by Human Rights organisations, not only over the disappearance of human rights activists but for the injudicial killing of over 2,500 in his self initiated ‘War on Drugs.’

Prime Minister Abhisit Vejjajiva, said: ‘Thaskin Shinawatra does not believe in democracy and never did. It is not in his nature.’

As for the remaining protesters he said: ‘They can continue to protest if they wish, but they must do it peacefully.’

Surrounded and without food and water supplies in the hottest week of the year they are not expected to stay long.

Mr. Vejjajiva said he would continue to try and unite the country and would listen to complaints from poor farmers from North Eastern Thailand.

A  black pall of smoke from burning tyres rose over Bangkok. But there was little else to show the weeks days of chaos.

Revellers celebrating Songkran, the Thai New Year, carried on with the tradition of dousing themselves with water, a custom which has turned riotous, but all in good nature.  And the army and police joined in.