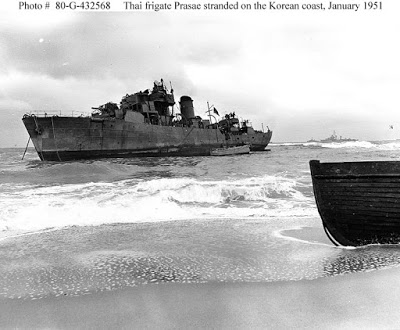 LEFT HAND DOWN A BIT! ITS THE THAI NAVY LARK

The credibility of Thailand took another blow today as the Guardian newspaper followed up on its report last year on slavery in the Thai fishing industry making it quite clear, if we were in any doubt, that officials were complicit in the trafficking of Rohingya – in many cases to their deaths.

As the might of the Thai Navy seems to be directed on two journalists, Alan Morison and Chutima Sidasathian, for suggesting they might have been involved in the trade, trafficked Rohingya have been giving harrowing accounts to Guardian journalists, of systematic torture murder and rape by Thai traffickers both on shore and offshore.

Journalists from the Guardian also interviewed a former fisherman who had decided human trafficking was much more rewarding. Its the difference between 30,000 Thai baht and 100,000 Thai baht, he said, admitting that money was the factor.

The Thai Navy of course did nothing. Well they have conducted quite a few push-offs.

But memorable was the account of how Rohingya were kept aboard a very large mother ship – the storage point for what appear to be 21st century slave auctions.

Heaven forbid that the Royal Thai Navy should find this or other such mystery vessels.

The almost incredible attack on the two journalists Alan Morison and Chutima Sidasathian for repeating one line of a Reuters report (while most of the time Reuters seem to have been following their work) may be something to do with ‘losing face’.

Truth of course is not a defence against libel in Thailand. There has to be an over-riding public interest.

That is of course why it is so dangerous to be a foreign correspondent in the country post internet.

Who decides what’s in the public interest is the key.

But if it is face-saving there could not have been a greater home goal.  This has of course massively rebounded on Thailand which is getting daily attacks from human rights groups, journalist groups, press freedom groups, and shortly I am sure the Royal Wootton Bassett Women’s Institute.

Now search wiki and you’ll see that near the top – way above Thai naval actions – this libel case is one of the main stories about the Royal Thai Navy.

Naval actions?  Oh dear, that’s not so good either.

First there was the Battle of Paknam.

This was at the mouth of the Chao Phraya in 1893 when the Siamese (as they were then) attacked a small French fleet Chulachomklao Fort in Samut Prakan with British made but badly aimed Armstrong guns and with a force of gunboats.

The Thais lost.  The French blockaded Bangkok and that ended the Franco-Siamese War and Thailand was forced to cede large territories in Laos and Cambodia to the French.

Guess who was blamed for Thailand’s defeat?  The following is a Thai view.

“As an important lesson from the skirmish, King Chulalongkorn realized that hiring foreigners as ship commanding officers and fort commanders was inadequate. The King decided that Thais must replace all foreigners to ensure that the navy’s mission to protect the country is complete. Such a task would be possible only with good training, thus he decided to send several of his children out to study various subjects: administration, army, navy and other related fields in Europe.”

It seems that that mission did not have total success for in 1941 there was the Battle of Koh Chang, also against the French who won again.  HTMS Thonburi never fought again – though it’s decking and turrets are kept at the Thai Naval Academy at Samut Prakan.

After that Thailand had to cede a lot more territory in Cambodia.  (They got it back shortly though when Japan invaded.)

The Thai version is different.

“Because of the bravery of the three (Thai) ships, enemy ships were damaged and had to retreat. The French later issued an announcement that they were victorious and did not sustain any damage which was contrary to the fact that trading ships which encountered the Lamotte-Picquet in Saigon reported that the ship was leaning to one side and was undergoing extensive repairs.”

Thailand’s next recorded war experience was in the Korean War.  This was also an unhappy experience.

HMTS Prasae ran into the Korean peninsula during a snow storm due to defective radar.  To add to the misery of the stranded sailors a US helicopter lost part of a rotor which caused an explosion of shells stored on deck.

Attempts to retrieve the ship failed and eventually it was bombarded with friendly fire to stop it falling into the hands of the enemy.

There is no dispute over that one. 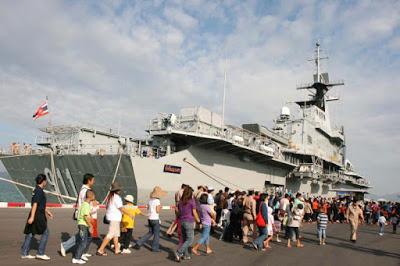 It originally had ‘Matador’ aircraft which were reconditioned British Harrier jets – but they ran out of spare parts and then had to get rid of the planes yonks ago.

It is now a tourist attraction for Thais at Sattahip naval base but leaves base once a month for training day.  Foreigners apparently cannot view.

Perhaps they think someone is going to steal the golden rivet.


Of course with a potted history of the Royal Thai Navy at hand and a briefing on the shenanigans surrounding the cases of Alan Morison and Chutima Sidasathain an old acquaintance George Carmen QC would have had people rocking in the aisles in Phuket court had he been alive and permitted to perform.

Instead the joke appears to bet that not even the prosecutor bothered to turn up to listen to and challenge the defence case.

No need to wish Alan and Oi good luck. We’ve done that. I’m just wondering when we will hear the news of another great Thai Naval Victory.

We will hear the result of the court case in September, meanwhile British workers rights activist Andy Hall is now waiting to hear whether a court will accept more cases brought by National Fruit against him for accusing them of the exploitation of Burmese migrant workers.

Footnote: The Navy Lark was a BBC radio sit-com based on an imaginary Royal Naval ship HMS Troutbridge. The series featured the country of Potarneyland and officers of its navy.
Potarneyland had joined NATO because its government believed NATO was a free gift scheme.