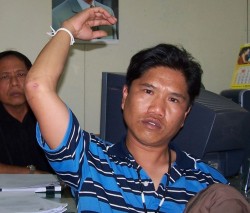 A Thai policeman who murdered his 18-yr-old bride two weeks after their wedding has been sentenced to 25 years after pleading guilty at Pai Provincial Court.

Sergeant Uthai Dechawiwat had a life sentence reduced in half after he pleaded guilty. He admitted clubbing his pregnant wife to death last year at their home in Pai, Mae Song Province in northern Thailand. The body was discovered by his 10-yr-old daughter from a previous marriage.

Dechachiwat has still to face trial on charges of murdering Canadian backpacker Leo Del Pinto and the attempted murder of his friend Carly Reisig three years ago.
The trial process has been fraught with technical and legal hitches and the failure of witnesses to turn up including the Chief of Police in Pai Colonel Sombat Panya.

The family in Calgary have been informed of the conviction by the Canadian Department of Foreign Affairs and Trade.

Leo’s father Ernie Del Pinto said from Calgary: ‘Now this case is over I hope for more swift justice for my son.’