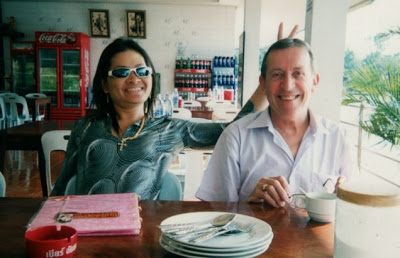 HE KEPT SHOTGUN BY HIS BED – BUT IT DID NOT SAVE HIM FROM WIFE AND FAMILY
Police in Thailand said today they had wrapped up the murder
of a 68-year-old retired North London garage owner three years after he was
knifed and clubbed to death in his paradise retirement home.

Just a week after a court sentenced the wife of 68-year-old
Raymond Hind to life in prison and her lover to 33 years, Thai police today
brought in the wife’s missing younger brother – whom they said was the third
accomplice.
Komkrit Imnoi, 30, who was arrested in Songkhla, South
Thailand, was charged with conspiracy to murder, in a killing which sent chills
through the British community in Hua Hin, 200 miles south of Bangkok on the
Gulf of Thailand. 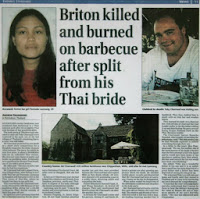 Just four years before Toby Charnaud, 42, a gentleman farmer
from Chippenham turned Hua Hin bar owner, was clubbed to death, and his body
barbecued and chopped into pieces, and distributed around Kaeng Krajan National
Park in Thailand, his recently divorced wife Pannada and members of her family.
Witnesses had described how Hind, from Edgware, who owned a
garage in Cheshunt, before he married and moved back to Thailand had told
friends he was waiting for his own death.
He was already terminally ill from throat cancer and
constriction of the arteries, but he was aware of stories from people who knew
his wife Bunnag, nicknamed ‘Namfon’ – Falling Rain, that he might be attacked.
As a result he kept a shotgun by his bedside. He was also aware his wife had a younger
lover Thannakorn Bussa, aged 30, nicknamed ‘Lek’.
Benjawong Singtuen, 32, from Kamphaeng Phet province said:
‘I worked at her bar when Namfon told me she could not wait for Raymond to die.
She said he had promised her 10 million baht but the business and bar were in
her name already. She continually asked him to buy her gold.’
‘She had a series of other lovers who were both Thai and
foreigners’.
‘She had lived in England with Raymond, who was a very sweet
man.  I left her bar. I could not stand
her any more. He was very ill. He was dying anyway’.
Tourist Police chief
Colonel Aphichai Thi-amart told him that he would have a chance to defend
himself in court, reported DPA.
“We want to
let tourists and their relatives know that if something bad happens to them in
this country, Thai police will never ignore it and will hunt down the
culprits,” Aphichai said.

Three years ago it never looked like it would turn out this way. Two British pensioners in Hua Hin raised funds to keep the issue alive and to provide a family lawyer – and British Embassy officials accompanied Hind’s daughter Zoe to put her name on the prosecution after Namfon succeeded in getting bail.