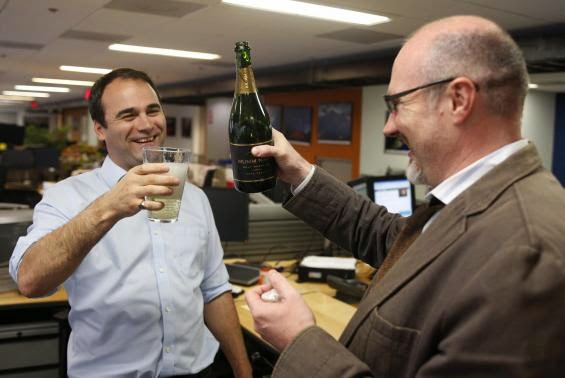 Reuter’s news agency was attacked today for celebrating a Pulitzer Prize in champagne while two journalists who provided critical assistance on their story face jail.


Reuters journalists Jason Szep and Andrew R.C. Marshall were commended for their ‘courageous reporting’ over two years on the plight of the Rohingya minority in Burma – but  the on the ground journalists who provided them with vital information and meetings – tomorrow face jail for libel for the Reuters report.

Jason Szep is himself pictured on the Reuters website drinking champagne to celebrate the award but in south Thailand to where the Rohingya have been fleeing from Burma, journalists Alan Morison, 66, and Chutima Sidasathian,33, say that all efforts to contact Reuters for support have failed.

And Jason Szep, claimed Morison, has several times simply put down his phone.

Sidasathien and Morison have been covering the Rohingya problem for 7 years and it was Sidasathien who took Jason Szep to see her personal contacts on the story in Phang Na southern Thailand, where brokers and agents explained in detail links to the military and how the persecuted people were smuggled to Malaysia – at great cost in money and in lives. She also assisted on follow up stories.

“Reuters have not spoken to us since we were charged with libel for their story, “ said Morison, a former CNN editor today.

‘I called Jason on his mobile in Thailand but he just puts it down. Attempts to speak to somebody in Reuters in Washington have also failed.”

Ironically the couple who run the news website Phuketwan based on the Thai holiday island of Phuket are being sued over one paragraph from a Reuters report which suggested the Thai Navy were implicated in the trafficking of Rohingya. Several other news organisations also carried the same story in Thailand but have not been prosecuted.

There is speculation that Thai military intelligence have realised that Phuketwan has been the source of many stories on the Rohungya – which have been detrimental to the Thai armed forces. Morison says he believes the Navy is trying to shut Phuketwan down.

Morison and Sidasathian themselves have won five awards for ‘investigative journalism’, ‘human rights protection’ and ‘Scoop of the Year’ in conjunction with the South China Morning Post – all of the awards have been for their work on the Rohingyas. They have been the ‘to go to’ journalists on the Rohingya issue.

They are due to surrender to bail at Phuket Provincial Court tomorrow after being sued for criminal libel and libel and libel under the Computer Crime Act – cases submitted by a Thai Naval officer backed by the Prosecutor. Both have said they will refuse to pay bail.

“Chutima is surprised and shocked that nothing has been said in defence of media freedom and Phuketwan by the organisation she helped, with her usual generosity, to win the Pulitzer. I am deeply disappointed, and I expect many others will be, too,” said Morrison.

Reuters have yet to be sued for their story, but Jason Szep was transferred to Washington when threats were made. A Reuter’s spokesman today simply said: “.  We wish to emphasize that Reuters’ story does not single out the Thai Royal Navy, but explores the responsibility of all involved in patrolling the Thai seas and provides their perspectives.”

The attack on Morison and Sidasathian has been roundly condemned by international news organisations and human rights organisations including the New York based Committee to Protect Journalists, Human Rights Watch Asia, The International Federation of Journalists, and the Foreign Correspondents Club of Thailand. Demonstrations have also been held in Morison’s home town, Melbourne, in Australia.