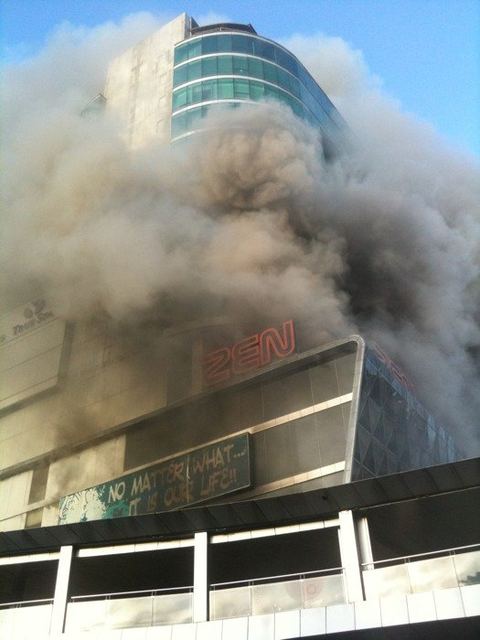 Bangkok was engulfed by fires and rioting today as defeated Red Shirt protesters vented their anger at a military crackdown with a burning and looting spree.

As black smoke swirled across the Thai capital, the city’s stock exchange, a TV station and one of South-East Asia’s biggest shopping malls were among the buildings set ablaze.

At least five people were reported to have been killed as clashes continued between the demonstrators and the Thai troops who stormed the barricades of sharpened bamboo stakes and petrol-filled tyres. Other people were trapped inside blazing buildings as the city degenerated into full- scale urban warfare.

Central World Bangkok ablaze
Troops in armoured vehicles and firing semi-automatic weapons advanced at dawn on an area in central Bangkok that has been occupied for more than six weeks by thousands of Red Shirts. Troops methodically picked their way through the camp, securing hand grenades.

As the soldiers surrounded the camp, the leaders offered to surrender, despite supporters urging them to fight, screaming and crying as gunfire rang out nearby.

Moments later, live television showed four Red Shirt leaders in police custody with an army spokesman claiming that the protest site was under army control and that the military had halted operations. The announcement only provoked more violence and a wave of arson.

There were also reports of journalists, who the Red Shirts blame for their defeat, being attacked. Staff at the Nation and Bangkok Post newspapers were evacuated after protesters accused them of biased reporting in favour of the government. In the district of Samrong, where some of the Red Shirts are now gathering, British schoolteacher Richard Barrow said: ‘Every time the TV showed pictures of burning buildings they cheered. The biggest cheer was for Channel 3 building on fire.’

In the Din Daeng area, the office of the Narcotics Control Board was set alight, as was a government savings bank. In the centre of the city attacks were made on the Paragon and Central World shopping malls. In Siam Square a cinema was burned down. Shops were looted.

Two bodies were found in Ratchadamri Road, which leads to the main protest site, after troops followed an armoured car into the camp, a witness from the Reuters news agency said. They appeared to have been shot.

Three grenades exploded outside the camp, badly wounding two soldiers and a foreign journalist, believed to be Canadian. Among the dead was an Italian photo-journalist, who was shot in the stomach and died before he could reach hospital.

British journalist Andrew Chant said: ‘We came under attack from M79 grenades. The first one exploded in front of me but another one 100 yards away took down a solder and the Canadian. The Canadian was moaning a lot. There was a lot of blood.’

Rioting was seen in at least five areas of the city as protesters lit fires and burned tyres. Some hotels set up wooden barricades to prevent attacks. As the government announced a curfew starting tonight, stores throughout the city started pulling down shutters. Similar violence was reported in the provincial town of Udon Thani, a Red Shirt stronghold near the Laos border.

The attacks happened just hours after the protesters’ figurehead, deposed prime minister Thaksin Shinawatra, warned that if the government attacked in Bangkok there would be a ‘nationwide’ guerrilla war.

At lunchtime, Red Shirt leader Jatuporn Promphan appeared on the camp’s stage, pleading for the protest to stop.

‘Please understand and I know you all know I will never abandon you, but it is now time to avoid more lives lost, because it is our Red Shirts who got killed,’ he said.

The Red Shirts’ demands are the resignation of prime minister Abhisit Vejjajiva, who they say gained power illegally in a 2006 coup, and new elections. The government said yesterday that it would no longer negotiate with them.

It has accused Mr Thaksin, who was convicted of corruption after his removal from office, of funding the Red Shirts and has ordered more than 100 bank accounts belonging to his family and his supporters to be frozen.