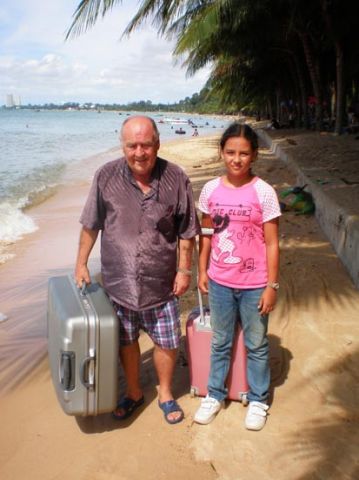 14 October 2007
Oap Loses Thai Home After Brief Steals It
A PENSIONER has lost his Thai retirement home after his lawyer stole it.
Alec Morton, from Dunfermline, has been ordered to leave his house in Bang Saray, 120 miles east of Bangkok.
Alec, 65, tried to beat rules which ban foreigners from buying Thai homes by organising the sale through lawyer Pijit Kerdchorn.

On yer bike. Alec Morton and Nina on the beach after losing their home in Bang Saray, Thailand
He asked him to set up a company which then bought the Ãƒâ€šÃ‚Â£30,000 house
in the Pattaya resort, where Alec wanted to live with his Thai wife
Thawee and daughter Nina, 12.
But when Alec went to see his new home after renovations, he found a Thai family living there.
He said: ‘They bought the house at auction. I rushed to see my lawyer and he was hiding under his desk. It’s unbelievable.’
Kerdchorn had forged the signatures of Alec and his wife and transferred the title deeds to his name.
He gave the papers to a housing bank to get a loan and when he defaulted on payments, they put the home up for auction.
Alec took Kerdchorn to court but lost his case.
He said: ‘I produced all receipts. We had proof he forged our
signatures. But as I cannot own a house in Thailand, the court ruled
against me.’
Alec has separated from his wife, who has come back to Scotland.
Sunday Mail story here