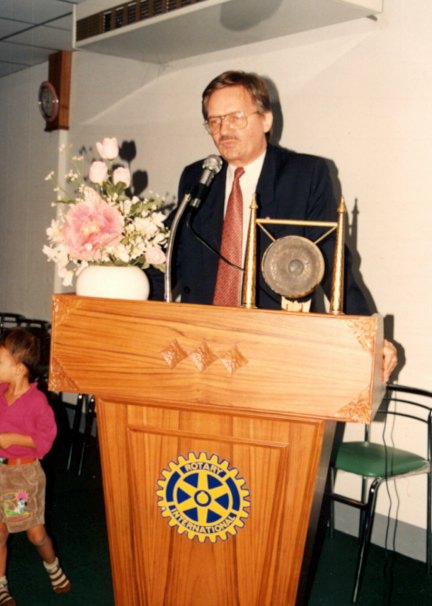 The first shots have been be fired in a Pattaya newspaper war.  A new-comer on the scene, ‘The Pattaya Times’ engineered by an ubiquitous American called Drew Noyes  – has accused Niels ‘Istedgade’ Colov (above) publisher of the Pattaya People, and boss of Pattaya People TV as a man  involved in a gold scam which has defrauded foreigners out of millions.
‘Pimp’
And then a couple of days ago the Pattaya Daily News, publish links to a site,  which identified Colov as a former pimp with convictions of living off immoral earnings, unlawful coercion, vandalism and receiving stolen goods.
Colov is also the leader of the Foreign Police Volunteers in Pattaya.
At the end of its report of the death of Martin Frutin, 69, the  Pattaya Daily News  (which incidentally seems to have been alone in pointing out that the Scots millionaire and man about town, who hob-nobbed with Pattaya publishers and worked for Colov,  also had a conviction for possessing child pornography) invited comments.  ‘Somchai’ posted the following link.

http://www.update.dk/cfje/lovbasen.nsf/ID/LB03872534
You have to use google translate if you don’t read Danish
The details about Niels Storm Martens Colov come in what purpots to be a Danish legal judgment on a case in which Colov sued  two journalists for calling him a heroin trafficker and other horrible things like running pyramid scams. The journalists lost their case.

The Cop
Niels is also a Scout master and organises international scouting jamborees – the sort of places we needed to keep Frutin out of, I guess.
But this is Pattaya where truth is all elusive.  More than anywhere else these rags become the servants of their masters whims, opening doors to the local hierarchy and grovelling to police and judiciary. My library is full pictures of local editors sitting down to dine with people I would not go near with the proverbial barge pole, all taken from their ‘Social’ and ‘High Society’ pages!
Colov denies all the above allegations. And indeed there seems to be a conspiracy afoot.
And I have to state unequivocably that I am making no suggestion whatsoever that Neil Colov is up to any criminal activitity in Thailand, nor do I have any evidence of such.  To Niels I say, the family resort Pattaya needs you to draw from your rich experiences and continue to contribute to the local community and then move on to the Philippines.
Nor indeed do I have personal evidence as to his former years in Denmark apart from some very faded newspaper cuttings.
A lot of things have been going on behind the scenes.

Drew Noyes of the  ‘Pattaya Times’ accused him of beng involved in a massive gold shares fraud.  More specifically he suggested Colov was a silent partner of Lance Shaw, an international confidence trickster who was scandalously released on bail at the end of last year by Pattaya Court.  Shaw has openly boasted that he pays off the authorities, and taunts his victims.
(Noyes has now withdrawn these allegations – July 2010. At Neils Colov’s request I am more than happy to point this out. But there is still a disgruntled defrauded foreigner out there in the modified story at this link to the Pattaya Times.
Drew Noyes, the man behind the Pattaya Times, has been referred to as ‘Fringe Benefit’ because he seems to get himself invited to every party in town. His name is all over the local press,  not because he is the guy on the fringe of the crowd who never seems to get his round in, as somebody has suggested.  He is a man with a mission, which it  to make money I think and be adored?  Well, that was my first impression after doing a ‘Google’,  but I have now spoken to Drew, who insists he is really all about making Pattaya a better place.
‘ You won’t see endless dead bodies, or any for that matter,  in the newspaper I manage and edit,’ he says, which is a great relief.
The broadsheet ‘Pattaya Times’ is apparently ‘the biggest English language newspaper in Thailand outside Bangkok’ and is distributed in 485 locations on the eastern seaboard. I guess I must be a little out of touch as I have not seen a copy, but Drew has promised to put me right.
Little time for socialising
Drew also says that with nine kids he does not have a lot of time for socialising but does go to the big events ‘especially if asked by someone of great power’.   He has suggested we meet up at a  forthcoming Breast Cancer fund-raiser but as its called ‘Pink Polo’ I may have to desist.  I guess also the boss of Kingpower will be there.
Anyway newspaper bosses are having a go at each other.  In England this only seems to happen when Editors steal each other’s girlfriends ( e.g. Donald Trelford of the Observer v Andrew Neil Sunday Times, in, ironically, the era of the ‘Asian Babes’)  So welcome indeed to the world of Pattaya journalism where in the pursuit of truth one can freely show video and post reports of  of foreign tourists and residents in all sort of post death situations without any thought whatsoever of their families or concept of human dignity, except thank goodness apparently – the Pattaya Times – where you read stuff which has already been printed elsewhere.

Don’t go to war boys. It will be messy.  Anything could happen. There are too many secrets out there. The next thing you know Rotary will be going to war with the Masons with machetes,  the Pattaya ExPat Club, fighting the Pattaya City ExPat Club with zimmer frames , Tourist Police Assistants in a War against Volunteer Police…with pepper spray,  Boyztown-Sunnee Plaza with flailing leotards… its endless.
Everybody has his secrets.  Best keep them…………. Or contact me/us here.
Footnote: Martin Frutin was a ‘respected member’ of the Masons and Pattaya Rotary Club.
Niels Colov is a former President of Rotary Club – Jomtien & Pattaya,  current President of the Pattaya Expats Club…….and has a law firm.
Drew Noyes is a financial consultant , formed the opposition Pattaya City Expats Club , the Pattaya Optimists…….and has a law firm.