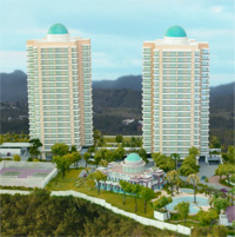 An elderly Briton, who described himself as a retired banker, said he ran down two teenagers killing them both when they ambushed him with a gun on the island of Cebu in the Philippines, police said today.

In a bid to protect his 28-yr-old Filipina wife Juriza, and daughter, Savanna, aged 4, Manchester born, Frank Bell, 60, said he ran his Kia Sorento over the teenagers, one of whom, it was claimed, was having an affair with his wife.

Today two separate police squads were investigating the circumstances of the deaths, and the relationship of the two dead youths ,  Borja and Harold Flores, aged 17 and 19, to Mrs. Bell. Both are Philppine nationals but Borja also has a US passport.

In a statement to Cebu Provincial Police Bell – full name Richard Frank Bell, said that he was driving when he was overtaken by the youths on a motorcycle and shot at several times.

The youths also rode on ahead, it was alleged, parked up, and fired several more shots as he approached.  ‘According
to Bell, he hit the motorcycle where the gunman and the minor were, and
they were flung to the side of the road,’ said Sr. Police Supt. Erson
Digal.

After he reported the incident to police they found three slugs in his car and went to the scene to find the bodies.  Police Superintendent Rudolfo Albotra (Jnr) said by phone from the Provincial Police Headquarters: ‘ There appears to be a discrepancy in the story as to where the bodies were knocked over and found. Mr. Bell said he ran the boys over in self defence.

‘Police in Balamban where the incident occurred, are also looking at allegations made by the family of the boy, Borja, that he was having an affair with Mr. Bell’s wife.  Tests have been done on his hands to check for gun powder residue.  We need to rule out the possibility that he fired the shots himself.’

At the City Lights Garden condominium a management official said Bell had been resident in Cebu for two years and before that in Manila, after leaving Hong Kong where he was he was in ‘ banking’.