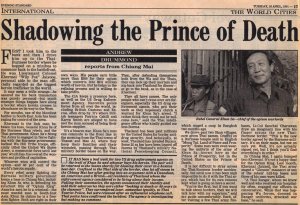 ‘Lord of the Golden Triangle was the launch film for the Observer Film Company and was made in co-operation with Granada Television for the ITV network in the U.K.

The Observer Film Company was formed after Drummond returned from the Shan States of Burma on foreign assignment for the Observer foreign desk where he met Khun Sa, aka Chan Shi
Fu, then reportedly the single biggest heroin trafficker in the world.

Drummond took a team back into the Shan States; Kimi Zabhiyan as producer, Jon Woods, from Granada Television as camera
director, and Les Honess, an independent sound technician.

The Observer Film Company teamed up with Granada Television, represented by Ray Fitzwalter, then Executive Producer at’World in Action’ .

The crew filmed for a month as Khun Sa’s men led them through the  opium fields, as battles for control of the crop raged with the rival Wa Army.

The film recorded the duplicity of the politics of heroin in SouthEast Asia and show how the drugs
flowed freely with the co-operation of  governments.

The film captured businessmen from Thailand doing deals in the camp of a man billed by the US Drugs Enforcement Administration as the  world’s biggest heroin dealer, and also showed Thai army
conscripts  building a road to his camp.

Khun Sa later did a deal with the Burmese government and went to retire in Rangoon (Yangon).

Drummond also reported on this for the Observer and Observer
colour supplement and he later returned to Khun Sa’s camp to filma series of
short films for World Monitor Television in Boston and British Sky  Broadcasting in London. The film gave the Observer Film Company a punch start and received favourable reviews both
in the U.K. and abroad.

‘Lord of the Golden Triangle’, Granada/Observer Films for ITV.

Credit: Investigation by Andrew Drummond of The Observer