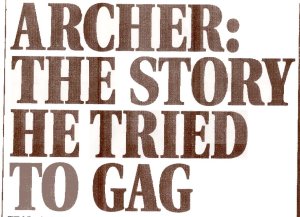 As if often the case in British scandals it is not an
indiscretion which brings down a government official or Member of
Parliament but the lies told afterwards.
Such was the case in a scandal involving Jeffrey Archer, Baron Archer
of Weston-Super-Mare, and former deputy chairman of Britain’s
Conservative Party.

Archer had been accused by a British Sunday newspaper of being person
who frequented prostitutes. His aide Michael Stacpoole, a former PR for
Walls Ice Cream, was photographed by a newspaper handing a pay-off to
prostitute Monica Coghlan in Victoria Station, London.
Archer set on a course of suing newspapers in Britain, the first of
which had to pay up was the Daily Star. Meanwhile he had paid off
Stacpoole and told him to disappear…..Stacpoole was a liability.
But eventually Archer’s lies were exposed. He had perjured himself
while giving evidence of an alibi. The hunt was on for Mr. Stacpoole,
one of the few men who knew the truth.
Andrew Drummond tracked down Archer’s bagman to Pattaya, east of
Bangkok, where he was content to dally with the girls of the resort’s
infamous entertainment business, and perhaps having run up some high
expenses himself, Stacpoole took the view that he had got a raw deal
from the soon to be disgraced Lord, and poured out his heart.
Archer was in the running to be the Lord Mayor of London when the scandal blew.
He was later jailed for perjury and sent to prison instead.