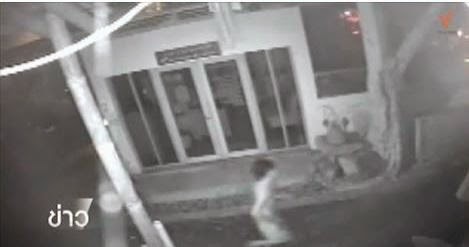 Thai PBS Television claimed today that one of the killers of David Miller and Hannah Witheridge stole Miller shorts after the murders on the holiday island of Koh Tao on Monday.


PBS claims that CCTV footage shows a suspicious character running past the camera from the direction of the crime scene. The bodies of Hannah and David were found naked but there is no evidence they had sex.  The DNA found in Hannah is of Asian origin.

The current story may not however be as far fetched as it sounds. Miller is likely to have worn, expensive, by Thai standards, clothes bought abroad. A Thai might not throw these away or leave them. It appears the clothes were removed from the bodies by people of Asian origin.

There is no public record of any shorts being left at the scene and police are not currently commenting on this story. But they do say they have evidence which they are not revealing.  They did however release CCTV footage of the suspicious character. But it is not possible to come to any conclusions from the clip PBS shown.

‘A new lead to the murder probe came as a team of investigators compared closed-circuit TV footage taken from the areas, and uncovered incriminating evidence on one particular individual.

Footage from the resort where Mr David Miller was residing showed him wearing a cream colored boxer shorts as he was walking toward the beach.
Comparing that footage to another at allocation nearby which captured the image of an Asian male shows the suspicious individual running pass the CCTV camera (from the direction of the crime scene) wearing the exact same shorts. A blue colored pants that was found by the body of Mr David is now believed to belong to the suspect.

This indicated that he mistakenly grabbed the pants of the victim to wear and left his own at the scene in a hurry as shown in the CCTV showing he ran pass hurriedly.’