AND HOW REFORMED IS BURMA  (MYANMAR) REALLY?

The abuse of the Rohingya in Burma continues. At the same time foreign companies and tourists are flooding in to the newly reformed country. Well just how reformed is it? Where are the forces in Burma defending this minority, whose very right to existence seems to be denied? This report was issued today by Human Rights Watch.

(Bangkok, March 27, 2013) – The Burmese government is systematically restricting humanitarian aid and imposing discriminatory policies on Rohingya Muslims in Arakan State, Human Rights Watch said today. The government should permit unfettered access to humanitarian agencies to provide assistance to Muslim populations, end segregated areas, and put forward a plan for those displaced to return to their homes.

“Burmese government restrictions on aid to Rohingya Muslims are creating a humanitarian crisis that will become a disaster when the rainy season arrives,” said Phil Robertson, deputy Asia director at Human Rights Watch. “Instead of addressing the problem, Burma’s leaders seem intent on keeping the Rohingya segregated in camps rather than planning for them to return to their homes.”

An ethnic Arakanese campaign of violence and abuses since June 2012 facilitated by and at times involving state security forces and government officials has displaced more than 125,000 Rohingya and Kaman Muslims in western Burma’s Arakan State. Tens of thousands of Rohingya still lack adequate humanitarian aid – leading to an unknown number of preventable deaths – in isolated, squalid displacement camps. Government security forces guarding the camps do not permit the residents to leave the camps, which has a devastating effect on their livelihoods, Human Rights Watch said.

Human Rights Watch has visited every major internally displaced person (IDP) camp in Sittwe Township in Arakan State, as well as pockets of unregistered displaced people in coastal and intra-coastal waterway areas, and in Mrauk-U Township, where many displaced Rohingya currently remain. Displaced Rohingya and non-Rohingya Muslims in Arakan State are located in 13 townships throughout the state; the 15 largest IDP camps are in the area of the state capital, Sittwe.

Several camps housing Rohingya are located in paddy fields and lowland areas that face heavy flooding during the rainy season, which will begin in May, yet the authorities have not taken serious steps to move them to higher ground. Humanitarian organizations in Arakan State are concerned that heavy rains will overflow already inadequate and overused latrines, spreading otherwise preventable waterborne diseases throughout the displaced population, whose health has already been weakened by inadequate food and medical care. In some sites visited by Human Rights Watch, a handful of latrines were being shared by several thousand displaced Rohingya.

“The government seems untroubled by the dire humanitarian conditions in the camps in Arakan State but it will be responsible for the lives unnecessarily lost,” Robertson said. “Concerned donor governments should be demanding that the Burmese government produce an action plan to resolve the crisis because continued inaction will only make the crisis worse.”

The Burmese government has obstructed the allocation of adequate land for relocation sites for displaced Rohingya and Kaman Muslims despite repeated appeals by humanitarian agencies. On March 18, the European Commission warned the situation would turn into a “humanitarian disaster” if the internally displaced people living on paddy fields and sand banks were not relocated to safer sites within weeks. The United Nations Office for the Coordination of Humanitarian Affairs (OCHA) likewise warned of a “potentially devastating” effect on displaced Rohingya when the rains start.

None of the displaced Rohingya interviewed by Human Rights Watch were consulted about where their shelters would be constructed. The government has refused to make a commitment to ensure their right to return home, or set out plans to ensure security for both the Muslim and Buddhist populations in the state. Human Rights Watch urged the Burmese government to treat displaced people in accordance with the UN Guiding Principles on Internal Displacement.

Among the displaced population are tens of thousands of “unregistered” Rohingya – those who were displaced between June and November 2012 but who have not been formally recorded by the Burmese authorities, even though they live in areas where the security forces deny them freedom of movement and their presence is known to the aid community.

Rather than providing assistance, state government officials have made excuses for denying the Rohingya aid, Human Rights Watch said. In February, Win Myaing, spokesman for the Arakan State government, told the Democratic Voice of Burma that Rohingya are deliberately inflating the numbers of those displaced to receive more aid. “Now, when we are making a list in the camp over here, then people from [another camp] will come,” he said. “Frankly, [the Rohingya] are just attempting to make the list bigger so that they can get more aid.” 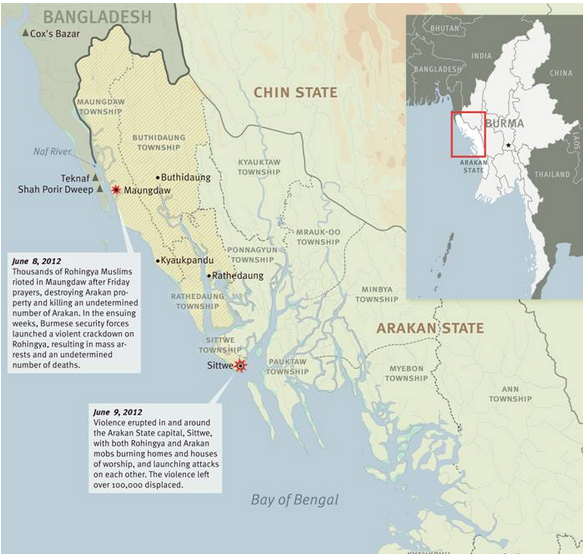 The government’s failure to put forward plans or make efforts to return displaced Rohingya and other Muslims to their original towns and villages heightens concerns of a long-term intent to segregate this population, Human Rights Watch said. In the city of Sittwe, the Muslim population is now completely segregated. The neighborhood of Aung Mingalar, which is the last remaining Muslim neighborhood in Sittwe, is surrounded by barbed wire and Burmese army soldiers.

A Muslim man in Aung Mingalar told Human Rights Watch that UN agencies have not been able to deliver any aid since June, saying, “We only want permission to bring food from outside to Aung Mingalar.”

In some areas, such as Myebon Township, the government and humanitarian agencies are constructing shelter on stilts over ground that will flood, rather than permitting the Rohingya to rebuild on land in their home village nearby. The authorities have told the UN and diplomatic community that the camps throughout the state are not envisioned as long-term “solutions,” but the government has failed to put forward plans for displaced people to return home, and also has not rejected demands by Arakanese communities to keep Rohingya segregated in remote areas.

“Donor governments should be pressing Burma’s government to allow humanitarian agencies to provide assistance to all those in need,” Robertson said. “But donors also need to make clear that government policies intended to segregate the Muslim population will be publicly opposed.”

The Burmese government has long prevented Rohingya from accessing health care in Arakan State, and restrictions have tightened since violence began in June. Human Rights Watch visited Arakan State’s largest government-operated hospital in Sittwe in late October, at a time of widespread violence against Muslims throughout the state, and there were no Muslim patients in the hospital.

A discriminatory Citizenship Law passed in 1982 effectively denied Burmese citizenship to Rohingya, who are estimated to number between 800,000 and 1 million people in Burma. The government does not allow Rohingya to travel between townships without special permission or paying substantial bribes to state security forces. Internally displaced Rohingya are not permitted to travel outside of displacement sites, severely restricting their ability to earn a livelihood. There are also severe restrictions on marriage and the number of children Rohingya can have – and the multiagency border guard force Nasaka typically demands sizable payments from Rohingya seeking to marry or preparing to give birth.

Arakan State’s Rohingya population also faces widespread hostility from the majority Burmese Buddhist society. The violence in Arakan State in June between Arakanese Buddhists and Rohingya Muslims was followed by planned attacks on Rohingya and Kaman Muslim communities in various townships in the state in October.

More recently, disputes between Buddhists and Muslims resulted in violence in the central Burma town of Meikhtila on March 20 to 22, which has spread to other parts of the country. During the violence, at least five mosques were burned down and an unknown number of people died as mobs and Buddhist monks attacked Muslim residents and set fire to Muslim homes, businesses, and places of worship. The violence in Meikhtila has displaced 12,000 Muslims, according to OCHA.

“The unfortunate lesson from the violence in Arakan State is that so far the government does little to hold accountable those who violate the rights of Muslims in Burma,” Robertson said. “By failing to stop violence and prosecute those who incite it, the country’s leaders are failing the test of reform.”

To view the Human Rights Watch 2012 report “‘The Government Could Have Stopped This’: Sectarian Violence and Ensuing Abuses in Burma’s Arakan State,” CLICK HERE 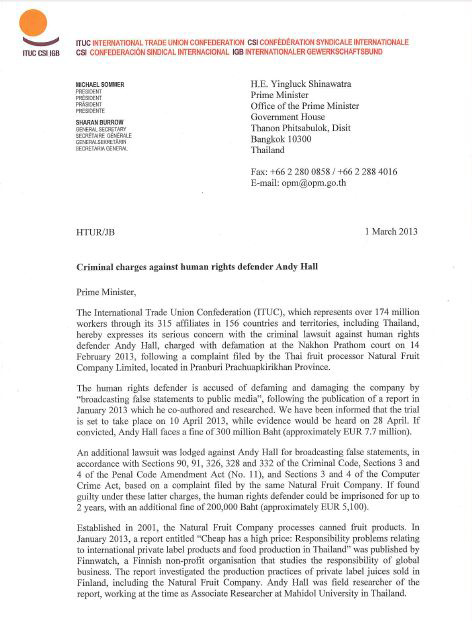