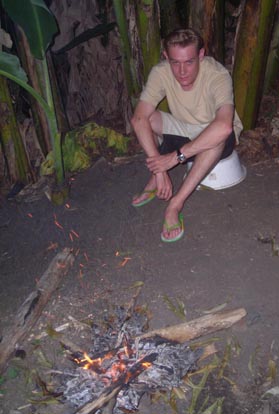 Jungle Brit gets permission to fly home with Filipina and baby
From Andrew Drummond, Bangkok, Wednesday August 14
Pictures: Andrew Chant
A Briton who fled to the jungle in the Philippines after being told he faced seven years in jail there for adultery has been given leave to return to England with his girlfriend and seven month old baby.

David Scott, 37, from Swindon, Wilts., spent last New Year in jail in Manila, after he was arrested with his 8 month pregnant Filipina girlfriend Cynthia Delfino, 28, during a night-time swoop by Philippines police and officers of the National Bureau of Investigation.
Accompanying the police was Cynthia’s Filipino husband Noriel Delfino, who said David, was demanding the couple be jailed for the maximum seven years in the Philippines for adultery unless they paid him the equivalent of Ãƒâ€šÃ‚Â£7,000.
There is no divorce in the Philippines, a strictly Catholic country, but rich families can seek costly annulments on the grounds of the mental incapacity of one of the partners.
The couple fled while on bail and were forced to live in the jungle, derelict houses, and finally a room provided by friends, before their baby girl Janina was born in a tiny clinic south of Manila.
A warrant was issued for their arrest but by paying bribes they were able to board a flight to Bangkok, Thailand.
With the help of local M.P. Anne Snelgrove, Mr. Scott was able to get British citizenship for baby Janina in Bangkok a month ago, and early today an official from the British Embassy in Bangkok  informed David the Cynthia’s application to travel with her baby to England was granted on humanitarian grounds.
In Bangkok David Scott said today: ‘Obviously we are both delighted.  It’s been a nine month ordeal. We would like to thank our M.P. and journalists and everybody who helped us fight to get our baby home to Britain.
‘When I flew to the Philippines to visit Cynthia for the birth of our baby her husband had already agreed to go through an annulment.  But I walked into a trap.  It’s been a long fight having to pay bribes every where I go.  But every time I look at my daughter I just know it was worth everything.’

Said Cynthia:  ‘I am so relieved. When the Embassy called this morning I just knew it was going to be good news. I am a little scared about going to Britain but  everybody has been so kind so far.’
Footnote: The following email was sent later by David Scott
Andrew Drummond and Andrew Chant saved us when Embassy could not help