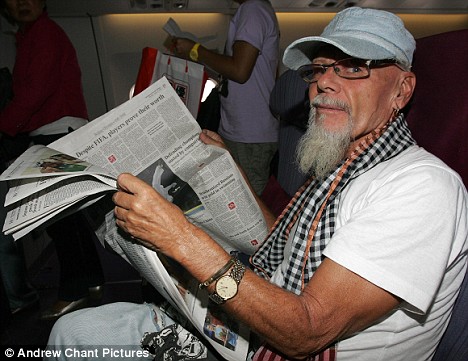 (originally publish September 2008)
When the disgraced former glam-rock star was released from jail in Vietnam, Bangkok based journalists Andrew Drummond and Andrew Chant made sure the convicted paedophile went back to the U.K., despite a Hong Kong diversion which was billed in the UK as Glitter’s Asian Tour 2008.
It was fitting as both Drummond and Chant were the journalists who had originally tracked him down to Vietnam and exposed his activities in Vung Tau after first finding his home in Cambodia.
But as Andrew Drummond reports he could easily have slipped away.   He also illustrates the role journalists are playing in this controversial issue of child sex abusers and the problems they encounter and the criticisms, some justified, they face.

‘Look here. This is their card. On it, it says ‘Protecting Children Everywhere’  – but they are clearly not.  Had we left it up to Scotland Yard’s CEOP (Scotland Yard’s Exploitation and Online Protection unit) Gary Glitter would now be roaming free in Thailand.
‘Once in Bangkok he could have got a false passport, changed his appearance, and quite literally disappeared.’
I’m talking to Sudarat Sereewat, a member of Thailand’s National Committee on Child Protection, and as Secretary General of FACE  (Fight Against Child Exploitation) the foreign paedophile’s worst enemy in Thailand.
Gary Glitter, real name Paul Francis Gadd, had finally been put on Flight TG901 to London after 48 hours of screaming, feigning illness, and balling out British Embassy officials and police.
But, as Sudarat intimated, he was within a hair’s breadth of freedom in Thailand. He just needed to escape a posse of reporters.
She adds: ‘It appears Scotland Yard was busily telling the world they were waiting to meet this man in London but they failed to tell Thailand’s Immigration department he was coming here.
In the ‘No Man’s land’ of Suvarnabhumi airport earlier this year I watched  as Scotland Yard’s  CEOP tried to get their man.
Because indirectly I, who was the person, who told Thai police what they were about to face, and initiated his Asian tour.
There has been considerable debate about the ‘Glitter’ story.  On the one hand its quite clear that there something quite appalling in the massive coverage Glitter’s latest tour and his subsequent hounding merely because Glitter is a ‘celebrity paedophile’.
The News of the World and SUN were leading the ‘Hang em high’ brigade, but there was, nevertheless, a pretty clear consensus that having served 2 years nine months in a Vietnamese jail for offences against Vietnamese children – his lawyers paid compensation to two families to avoid rape charges – he should be returned to regulators in Britain in all possible haste.

In the case of the benefits fraud the informant was told to contact the Department of Work and Pensions.  In the case of the Brit being a registered paedophile who was teaching Thai children in Bangkok,  the Embassy told the man to contact his local police station in Isaan!
No wonder he called the London SUN who subsequently called me.
On this occasion I also contacted Sudarat, who notified Bangkok Metropolitan Police’s Women and Children’s Investigation Branch.   I also notified a very senior policeman in the UK and through him CEOP.
The CEOP call turned out to be a totally pointless exercise. All  calls were immediately diverted to the press office. Calls to the Embassy were also re-routed to the Press Office.  I did not want any press information.
Besides waiting for an answer from the Embassy’s press department can often take days and the answer is not usually worth waiting for, in the sort of enquiries I tend to make.

Andy Chant and I investigated the Accrington man, Alan Smith, (right)and we came to the conclusion that in any of these cases it really was not worth telling the proper authorities first.
We found the paedophile,  verified the case,  and the man was removed from the school and deported without CEOP’s help.
Sudarat told us she had much more problems with CEOP than even we had.
Earlier this year the CEOP’ chose as their Liaison Officer on one of their publicised training courses  a political secretary at the Embassy, famous for describing a journalist from a respected Sunday newspaper, as being ‘scum of the earth’ during the 2004 Tsunami.
A short while later this young man was back in London.  He had taken to writing a blog in ‘The Nation’ newspaper which had to be stopped after two days, after it was described as ,well at best ‘patronising’, and bloggers reported him (no doubt falsely) as having been seen in Soi Cowboy, a red light area,  with a $5 whore!’
There are hundreds of ‘angry Brits’ in Thailand, out of sorts possibly because they have failed to get a Thai girlfriend back to the UK, so its open season when a British diplomat puts himself on the net, especially if he likes telling people how he sings karaoke with Thai generals.
Many people are grateful for the British Embassy’s help and I know of many such cases.
But the culture of ‘If you say nothing or do nothing you can’t get into trouble’  (a British official’s off the record comment to me, referring to calls from the Press) can sometimes seem all pervasive.
The Foreign  & Commonwealth Office, however  can and does look after itself and itself.
After the 2004 Tsunami an independent report carried out by the National Audit Office in the United Kingdom was scathing in its criticism of The British Embassy anf FCO effort.

The British Embassy were duly congratulated by a Junior Foreign Office Minister for doing a good job and publish a complete but unconvincing rebuttal,  which you can still find on the internet.
(Picture left: British Embassy Tsunami Desk Phuket!)
This year the British Foreign Office are again being condemned for obstruction and deceipt in the case of a Briton Julie Ward, 28, who was murdered in the Masai Game Reserve in Kenya 20 years ago.
The independent report compiled by Jon Stoddart, now the Chief Constable of Durham in Northern England, accused the British authorities of ‘inconsistency, falsehoods and downright lies’.  The Foreign office has already issued a denial.
The above reports are not criticisms by newspapers. They are from British Government departments written by government officers.
The FCO I am glad to say did not however go to the aid of a retired diplomat who was caught in Pattaya by a British Sunday newspaper and exposed under the headline ‘Her Majesty’s Vice-Consul and child pervert ring’ for dealing in naked pictures of under-aged boys.

He ran a coffee shop as part of the ‘Boyz Boyz Boyz’ complex in Pattaya – see Fighting for Justice
But the whole point here is that If CEOP want to operate in Thailand to protect children from Britain’s child sex predators they should be talking to people here who actually know the business, who the predators are, and how they evade the law.  In short they need to get down and dirty.
The British government, and others, have spent hundreds of thousands of pounds, on courses to train people, especially police, how to deal with child sex offenders.
Cash would be better spent on individual cases to ensure justice. Because the cash paedophiles have enables them to elude justice. This is the reality.
I have been in Thailand for 20 years and have seen scores of paedophiles walk. British, Germans, Dutch, French, Swiss,  American, the lot.
A whole series of foreigners, among them three Britons, were arrested in Pattaya earlier this year, for offences against children.  Not many of them are still in the system.  One Briton in particular, known to the kids as ‘The Ghost’ has been bailed again, even though his latest offence was committed, while on bail appealing a 14 year jail sentence for the rape of two under-aged girls.
Only high profile paedophiles, such as ‘Mr.Swirly’ or Gary Glitter , appear to be unable to beat  the system, and usually only after an international furore. This is a basic fact of life here.
British law enforcement officers such as those from CEOP, have to go through the Royal Thai Police Foreign Affairs Division.  All well and good. But there they have to join the queue along with the world’s other police forces and the RTP often have bigger and more lucrative fish to fry.
It is at this point that a lot of back scratching, the ritual exchange of police divisional and departmental shields and plaques ,  the dinners, the Embassy socials, all come in to play.
Their job would be best served in the middle of the action rather than just familiarity tours of Pattaya’s Sunee Plaza.
Until then their motto, ‘Protecting Children Everywhere’, may just be a slogan and we’ll just have to leave it to those who are actually reeling in paedophiles abroad.  The international and tabloid press.