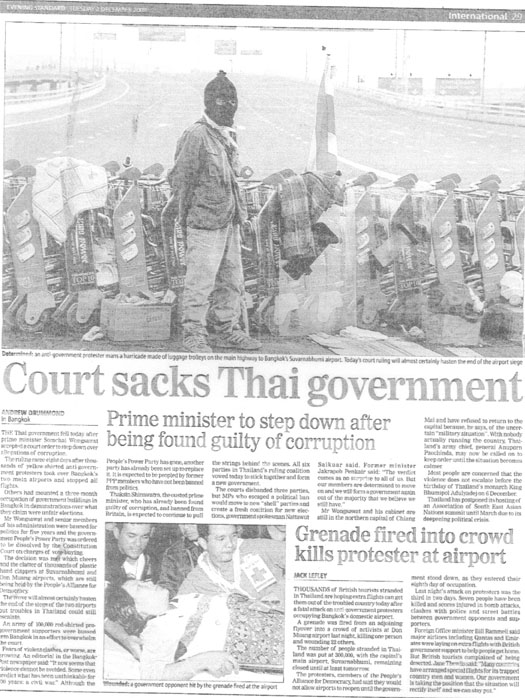 The airlift of passengers trapped in the Far East took off  in earnest last night as airlines came to the rescue of most nationalities – except for thousands of desperate Britons.
SAS had three flights for Scandinavians from Phuket, KLM came to the rescue of the Dutch. Air France provided a flight for the French. Jet Airways flew to the aid of the Indians. The Spanish provided military aircraft for their own nationals, Philippines Airlines went to the aid of Filipinas and the Italian government asked Alitalia to help their nationals.
Even Communist China has already got its citizens home on four rescue flights with just one more flight by China Southern Airlines to compete the job.
To add to that Thai Airways operated additional flights to Germany, China, Australia, Russia, Korea, Malaysia and Hong Kong ….but none to Britain.
But Britain had nothing on offer. Some  of the luckier Britons were bussed 12 hours to Phuket to get a flight by Eva Air, the Taiwanese airline, who were offering one direct flight to the U.K.
So last night hapless Britons, many of whom had been trapped in Thailand since last Tuesday when anti-government forces took over Bangkok’s two airports, joined the long queues at U-Tapao airbase, 130 miles east of Bangkok, in the hope of getting home via another country.
The only other alternative was to get down to the island of Phuket and hitch a ride on one of three Quantas airbuses to Singapore where the Britons, were told they could wait for a flight to London. Quantas runs code share flights with British Airways.
Last night at U-Tapau airport Briton Neil Lindsay, 53, queuing miserably to get a flight to Frankfurt said: ‘ I now know that to be British it to be a world second class citizen. ‘I’m in the check in queue with a Welshman. I have been here forty minutes and have not got inside the terminal yet. ‘There are hundreds of Indian and other nationalities and all queues seem to funnel into one small door.’

Mr. Lindsay, from Wade Bridge in Cornwall, who has been stuck in the Ambassador Conference hotel in the Thai resort of Pattaya since last Wednesday added: ‘We are stuck here without a hope, but all the Germans sent to our hotel have gone home already. The last went on Saturday. We Brits just keep getting bumped.’
Lindsay is among 121 Britons of 1,200 Thai airlines passengers who were bussed by airline to Pattaya, 90 miles east of Bangkok from the besieged Suvarnabhumi international airport last Wednesday. At least 7000 Britons are now thought to be stranded in Thailand out of a total of 240,000 tourists.
‘It’s quite clear that Brits are well down the pecking order when it comes to getting home. I have not seen any British Consular officials, but the Aussies have been here in force and I know they have flown to Phuket too, and have been using their influence to get their citizens home,’ said Mr. Lindsay .
‘I’ve seen them so often I know the Australian Consular people by name. ‘The British group keep putting their names on the list and they keep getting bumped off. Thai Airways have told us we can take their flights to Frankfurt, and then we are on our own. But we still get bumped.
‘To my knowledge no Briton has managed to get on any of the flights to Frankfurt which have left over the last few days from U-Tapao. ‘I have seen people going out everyday and coming back dejected in the evening.
‘I have rung up the Embassy twice, but they just say sit tight. I’m not surprised the Foreign Office will not supply charter flights to get us out, there are too many of us!
‘I had been holidaying in Thailand in Northern Thailand and was due to fly back last Wednesday morning. My flight was one of the first to be cancelled.
‘But that does not account for anything when it comes to getting a seat out of here. There has been queue jumping for any number of reasons.’
The Foreign Office has refused to charter aircraft on the grounds that that the skies over the provincial airport were too busy.
‘The key issue is the fact the two airports in Bangkok are closed and therefore you’ve effectively got planes stacking up and not being able to get slots. The situation is tense and we are monitoring events hour by hour,’ said Foreign Office Minister Bill Rammell.
But the fact that many other airlines are flying seems to contradict that view.