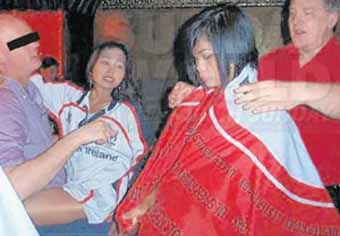 From ANDREW DRUMMOND in Bangkok
Monday, 5 September 2011
For Belfast Telegraph

A former RUC officer has denied carrying out the murder of his sex trade business partner after the victim was found shot to death in bed with his Filipina lover.

Northern Irishman David Balmer (54) was found dead in bed with 26-year-old Elma de Guia in their house in Barangay, near Angeles City in the Philippines, a popular destination for sex tourists.
Balmer’s business partner, Richard Agnew (51) – a former RUC officer from Larne who has been accused of running clubs where children are sold for sex – is among those who have been questioned over the killings on Friday.
Picture right: Preda: On the right Agnew drapes a young Filipina in the Ulster Football flag
In July police in the Philippines said they were seeking to charge Agnew after raids on clubs – allegedly owned by the former police officer – led to 100 sex workers being rescued.
The victims had been shot in the head and other parts of their bodies. Chief Inspector Luisito Tan said police had found 14 9mm pistol cartridges.
Agnew told officers: “It has nothing to do with me.”
Agnew, a big name in the Angeles City sex trade, has denied any knowledge of Balmer’s murder, which police believe is business-related.

Agnew claimed he last saw Balmer, who shared a house with him, arrive at 12am on Friday and when he returned to his home at 6am he found the front door had been forced open.
“I did not pay much attention to it. I thought that David had lost his key. I went straight to my room and slept,” he said.
When he woke up before noon on Friday, Agnew said, he did not bother to wake his friend up, and went to his office. On his return he even watched television for an hour before checking on Balmer.
“I then went to their room and saw them still lying on their bed and asked them if there is a problem, but got no response,” he said.
Blue Nile Club and hotel

“So I turned on the light and tried to wake them up and discovered they had been shot and killed,” said Agnew, owner of the Blue Nile Bar, Golden Nile, Sunshine, Tropican and several other sex bars in Angeles city – a focal point in the Philippines sex trade.
It is understood there are two other partners in business with Balmer and Agnew.
Police said that a local security guard, Marcial Hellacone (59), saw a white Toyota Innova in the area at around 3.30am on Friday. Inside the vehicle were a white male wearing black cap and a Filipino driver.
Hellacone said he saw the same vehicle parked outside Balmer and Agnew’s house at 3.40am on September 1.
He said he tried to approach the vehicle but its driver sped off before he got closer.
Chief Inspector Tan said the neighbours did not hear gunshots because of heavy rain.
Senior superintendent Rodolfo Recomono jnr said the victims had not been robbed. “We believe these murders were as a result of a conflict of business,” he said.

Agnew was arrested in 2004 after the National Bureau of Investigation raided the Blue Nile hotel and bar and allegedly found six girls aged between 11 and 13.
Right: Agnew’s girls were are called ‘Daddy’s Girls’ Note the red hand of Ulster
It was reported that new girls carried a ‘V’ badge on their bikini tops denoting their virginity.
He was released without charge and agreed to be voluntarily deported to Thailand, but returned a few months later.