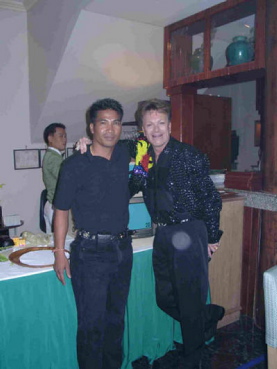 More than ten years have passed and the sound and picture are fuzzy. But a video is now doing the rounds which a judge refused allowance to be shown in a Thai court. The video records the very odd arrest of a Briton on a drugs charge in Pattaya, Thailand.

Lawyers for Kevin Quill, who was subsequently convicted, say comments by a police give the game away. A policeman is heard to say ‘tang tua dai!’ (I can dress)  and ‘mai aow laew!’ (don’t want any more).

They believe it refers to the policeman getting perhaps more than a good reward for his day’s work.  The tape  was also seen by General Noppodol Soomboonsap , Assistance Commissioner of Police in Bangkok, now retired, and he described is as ‘very bad.’

I can’t put my hand on my heart and say the video is that conclusive, the policeman in question does not use the personal pro-noun, but it does show something of a shambles going on in Pattaya Police station.  I asked for a copy of the video at the time but even Mr. Quill’s lawyer, who works in the Pattaya courts, baulked at the idea.

This video comes from a copy which was sent to Britain for safekeeping.

This is Pattaya in October 2001.  Mr. Quill, from Halifax, Yorkshire, was a partner in a hotel and club venture in ‘Boyztown’ in Pattaya with Scotsmen Jim Lumsden (below left with friend)  and Gordon May.

He was due to return to the United Kingdom and HE claims that one of the Scotsmen acquired a massive haul of cigarettes (200 cartons of Benson & Hedges) for him from an Immigration Policeman at Don Muang,  from which he could earn a small fortune on re-sale in Britain.

With the cigarettes neatly packed he duly set off in the ‘hotel  taxi’ which took an odd route leading to the Sukhumvit  Highway. The car was stopped by police at a roadblock, which was not being used to stop anyone else, and the driver was ordered to drive straight to the police station in Soi 9.

Amazingly the local press and television were present as police made their ‘shock’ discovery.  They found the cigarettes immediately, then in front of the media  inside one packet in one of the 200 cartons they found just under 100 tablets of ‘yaa baa’ methamphetamine, wrapped in silver foil as sold on the streets of Pattaya.  Only one carton was opened.

It appears one camera continued rolling. Kevin Quill says he was told to say nothing on camera or things could go badly for him. He kept shtum.

On the video police posed  alongside him and a couple of days later rather indiscreetly went off to drink ‘Johnnie Walker Black’ at the Scotsmen’s club ‘Boyz Boyz Boyz’.

Removed as director of his own company

While he was in jail Quill was removed as a director of his own company by the Scotsmen, who claimed, that by his actions he had smeared their reputation.  Mr. Quill was convicted, then acquitted on appeal.

The Embassy Letter: But why would the Thai police frame Kevin Quill? Follow the money.

A letter from the British Consul Deryck Fisher who said he had received an apology for the frame-up of Kevin Quill from the Assistant Commissioner of Police, General Noppadol Somboonsap, was dismissed by the lower court in Pattaya Court. But Kevin Quill was found not guilty on appeal.

Believing he would be acquitted at the Supreme Court too, he returned from a trip to Britain and to his horror was jailed for six years.

So why would a person who has absolutely no association with drugs insert methamphetamines into a clearly massive contraband haul of 200 cartons of Benson & Cigarettes packed into two suitcases and which ran a clear chance of discovery?

And why did police claim that the cigarettes came from Cambodia?

And what happened to the cigarettes?

The first question I might have asked Mr.Quill was ‘Where on earth did you get this lot?’

Kevin Quill has been approached by the producers of ‘Locked up Abroad’ but he developed throat cancer while in jail.  Because of the subject, ‘Boyztown’, and also because he has voice box problems, this may be too tough a job for the producers to progress.

But having been sent back to Britain to complete his sentence Kevin Quill is now free and he will never forget his Thai experience.

Footnote: Incidentally I was prosecuted at the time by Jim Lumsden for stating the obvious. I was acquitted on appeal, but yes, there’s always the supreme court. Link ere

What was quite shocking about this case was that Gordon May and Jim Lumsden had been involved in other similar controversies in which they had acquired money under strange circumstances.

First of all they left a property company in Edinburgh called Teague Homes and the company report said Mr. May had misappropriated over two hundred thousand pounds. Then the directors mysteriously withdrew all accusations.

Then after taking over Boyz Boyz Boyz in Pattaya together with the Ambiance Hotel, their new young partner Iain Macdonald, the son of a former provost (Mayor) of Inverness died in a fire in the Ambiance Hotel, leaving quarter of a million pound sharehold to Gordon May’s Thai boyfriend, who, yes you have guessed, it did not receive a penny.

How do I know? Well I interviewed Supanya and he told me. Seemed he was upset that he did not even get Iain’s motorycle. ‘That went to the lawyer’.

Don’t take my word for it. Here are the documents which were up on this site previously.

Notice the signatures on this will: Gordon May, James Lumsden, Iain Macdonald and Supun Kampanya – but hang on a second isn’t Supun Kampanya the beneficiary in Thailand of his 50 per cent stake in the Ambience Hotel and Boyz Boyz Boyz?  And are not beneficiaries banned from witnessing wills from which they benefit?  Whoops, perhaps, we had better remove James Lumsden and Gordon May’s names from here too.

But Iain’s Scottish mother is under no illusions about what has gone on in Pattaya.

Well, down in Pattaya it looks like nothing will be done until somebody ‘answers to God’. I mean do not we see these names in the ahem ‘society pages’ of the local rags with regular monotony.

Over the years I have had lots of people call me from Pattaya to say their bars are raided and blaming Scots men for their troubles. There has been little more I can do. I’m Scots too and I have done my bit now. Its up to you to protect yourselves. Try yodelling.

It’s a cat fight. But best of luck.


The Strange Tale of Transvestites, Crooked Cops, A Mutilated Corpse…