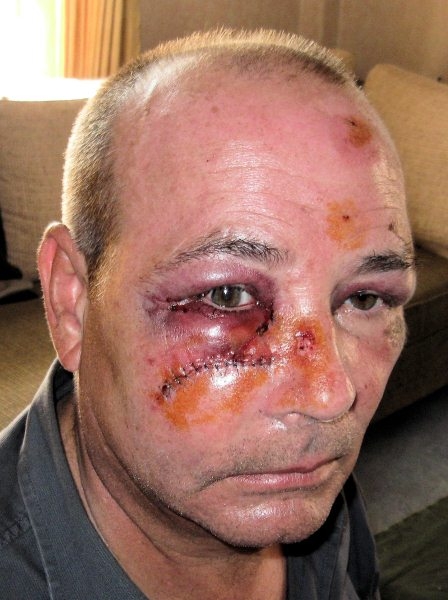 Keith Burbage wanted his money back
This is the face of British retired executive Keith Burbage. The former director of ‘The Stationery Office’  was beaten after pulling out of a house purchase deal in Thailand.
Burbage, 56, now retired, had decided to fight back after losing a ÃƒÂ¢Ã¢â‚¬Å¡Ã‚Â¤40,000 deposit on a ÃƒÂ¢Ã¢â‚¬Å¡Ã‚Â¤200,000 new house in the  ‘upmarket’ resort of Hua Hin, 100 miles south of Bangkok.

His beating comes after another retired house-buyer was paralysed for the rest of his life after being gunned down outside his ‘dream home’.

Today Burbage said’: ‘I am in hiding and in fear for my life. I am a victim of a property fraud, but here if you fight back you can die.’

Burbage, said he survived because passers-by came to his aid as he was being beaten with what appeared to be a baseball bat.  He says he has little confidence in the police.

Witnesses say his attacker, who arrived in a black car, had been waiting for hours.

Burbage, former Managing Director (Services) for the TSO, quit his Fulham home three years ago taking early retirement.
In Hua Hin, where the King of Thailand has his summer palace here, ÃƒÂ¢Ã¢â‚¬Å¡Ã‚Â¤200,000 would have bought him a luxury house with pool, and, to Burbage it seemed paradise.

The resort boasts top quality spas, miles and miles of white sand beach fringed by coconut palms, some of the best golf courses in Thailand, and many trendy restaurants.

‘I was captivated by it,’ he said.

But what is not mentioned in the glossy brochures, is that the ‘ retirement’ property business has been invaded by down market ‘businessmen’ from Britain and Europe. The only thing they have in common is that none have been in the property business before and many have a colourful past.

‘International mafia targets foreigner who was suing over land deal’ was the headline on the Thai language Hua City News last week when Burbage was found in a pool of blood outside the white gates of the condominium he was renting.

Burbage attacked at the gates of this condo
This story never made the local English language press Hua Hin Today and the Hua Hin Observer, both are owned by foreign property developers.

Today (Wed) Burbage is suing for the return of his cash in the local provincial court: ‘I am trying to work out how to get to the court without being ambushed on the way.  I am in fear for my life,’ he said.

He had put down the deposit with a European developer, only to find out later he had been palmed off with a home on a different plot 500 square metres smaller.  He asked for his money back.  The company refused and said Burbage: ‘I was warned not to mess with people with connections.
‘There is nobody protecting people from the foreign mafia here, least of all the police. The investigation is going nowhere,’ he added.

Donald Whiting, 65, an ex-US marine is also in hiding with his partner Dolly Samson.

First Whiting’s car was firebombed, then he was gunned down outside his home, after he publicly complained about his property developer, not the same as Burbage’s.

Napatsorn Oxley, known as Sarah, the Thai wife of British property developer Darren Oxley, has been charged with hiring assassins to kill him.

Police have also arrested the three would be assassins, who, police claimed, said she paid the equivalent of Ãƒâ€šÃ‚Â£600 pounds to fire-bomb Whiting’s car and Ãƒâ€šÃ‚Â£2,000 pounds to kill him. He was shot five times outside his home.  In hiding Whiting is paralysed and needs 24 hour care.

Those who allegedly plotted to kill him have got bail and he has no witness protection.

‘It’s a living nightmare,’ he said. ‘Those with money can just walk free in Thailand.’

Darren Oxley is on the run from Sheffield Crown Court. He fled bail in 2001, on charges of conspiracy to supply drugs.

Another British property group ran by South Londoners promoted the Hua Hin Country Club, using the figure of England and Chelsea footballer Joe Cole, and took over ÃƒÂ¢Ã¢â‚¬Å¡Ã‚Â¤1 million in deposits off plan.

The Hua Hin Country Club is still being promoted on the internet….and still not one brick has been laid.

A British Embassy spokesman advised potentional property buyers in Thailand to heed the Foreign Office Travel Advisory.
‘People have been sold properties which do not exist, have trouble getting ownership papers, and in once case we know the same property was sold to 12 different clients. Going through the courts can take years.’