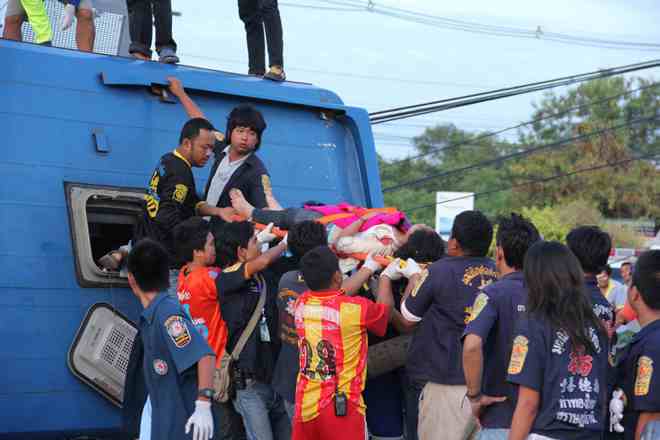 As the death toll today role to 11 a British has woman confirmed how her boyfriend pleaded with a long distance bus driver to slow down before the fatal crash in south Thailand.

Holding back tears Roberta Norton, 31 who was travelling with her partner Jonathan Bennett, 28, said she had an ‘ominous feeling’ something bad was going to happen.

“We were so alarmed at the speed that at around 2 a.m. and the bus swerving that Jonathan actually got up and walked up to the driver asking and gesturing at him to slow down.

“He was driving like a mad man. He did slow down for a while but then later when we were sleeping he must have sped up again,” she said.

Jonathan’s pleas were in vain. The bus is reported to have hit the central reservation after a tyre burst then careered into an electricity pylon.

The couple, who both sustained serious but not life threatening injuries, had taken the coach from the Thai capital Bangkok to Ko Phang Ngan, an island off Koh Samui known for its famous ‘Full Moon’ beach parties.

Ms. Norton, a Personal Assistant to a Dean at Sussex University said: “When the bus made its last swerve I woke up immediately and distinctly remember it going onto two wheels and thinking we’re in trouble.

“Then I remember being on the floor holding onto Jonathon’s hand hearing him say ‘Stay with me. Stay with me’. “I was covered in blood but had no idea where it was coming from and I must have been falling in and out of consciousness.

“The next thing I remember is both of us being dragged out of the wreckage and Jonathon screaming in agony.

“Then I woke up in hospital next to an Indian lady who was making a terrifying wailing sound because her brother had died in the crash.”

The couple was taken to Surat Thani Hospital for treatment.

Roberta Norton’s statement confirms reports from other survivors on the bus.

Ms. Norton, who is originally from Guernsey but who has been living with her partner Jonathon in Worthing, West Sussex, suffered a large gash to her skull, requiring 35 stitches and lost a lot of blood but is otherwise able to move. Mr. Bennett, originally from Liskeard, Cornwall, has a badly broken leg that has required surgery as well as severe cuts and bruises to his head.

The driver, his two attendants and seven other Thai and foreign tourists died in the crash. Ms Norton said: “It is a miracle we have survived. We were in the front of the coach, just three seats behind the driver.”

The couple, who are both musicians were on a years holiday that they started in Bangkok in April. They had travelled to Northern Thailand, Laos, Vietnam and Cambodia before returning to Bangkok last weekend and taking the coach trip to see Thailand’s southern islands.

They plan to return to the UK as soon as they can to seek treatment for Jonathan’s broken leg. Thailand is relatively one of the most dangerous places for UK tourists to visit, thanks largely to its lethal roads. The per capita road death rate is more than six times greater than the UK.

Last year 3 British backpackers, Max Boomgaarden-Cook, Bruno Melling-Firth and Conrad Quashie died when the coach they were travelling in swung into the path of an incoming bus on their way to the northern Thai city of Chiang Mai.

The mothers of the victims urged the Foreign and Commonwealth Office to make warnings about road travel in Thailand more explicit.

The FCO travel advisory for Thailand warns mostly about the dangers of motorcycles but now also says: “Serious accidents involving other vehicles including cars, coaches and mini-buses also occur. Many accidents are due to poor application of vehicle and driver safety standards. In June 2011, three British nationals were killed in an accident involving overnight coach travel. Seek local advice if you are in any doubt about the safety of your transport provider.”