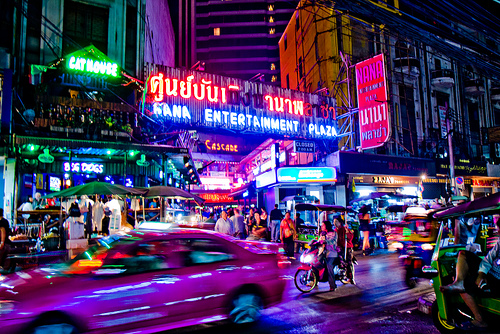 The visit by Unite Chief Derek Simpson to a Bangkok sex bar was
‘inappropriate and regrettable’, a Thai labour leader said in Bangkok
today.
Following revelations that Simpson, Joint Secretary General of
Unite, which is leading the British Airways strike,  went to a bar
called ‘Playskool’  with a union colleague while on a stop-over to
Australia, Thai car workers’ union chief Yongyudh Mentaphao said he was
upset at the news.
‘It is inappropriate and regrettable a British union leader should visit
such a place. I would have preferred had they not even gone to look’,
said the chairman of the Federation of Thailand Automotive Workers’
Unions.

‘I have travelled abroad and it is quite obvious that the Thai sex trade
is famous, because unfortunately I am always asked about it. The last
time was in Australia.  I find it distasteful that women  have to work
like this.  But it is a fact. Of course, if women did not need to work
like this they would not.
‘Nevertheless this Bangkok visit reflects badly on us all.’
The Unite union bosses’ trip to the go-go bar took place while they were
on their way to Australia for talks with unions there.  Their meeting
with three Thai car union bosses did not take place until March 8th on
the return leg to London
‘They told us it was their last day in Thailand,’ said Yongyudh Mentaphao. ‘We discussed the global steel trade.’
Simpson was spotted entering ‘The Playskool’ a-go-go bar with Unite
colleague Terry Pye on February 29th, while visiting the city’s Nana
Entertainment Plaza red light area,  by a former Transport and General
Workers Union shop steward Denis Simons, 72, from Nottingham.
Mr. Denis was visiting Bangkok with his wife, Hazel, 69, and son Lee, 47
and they had also spotted the two Unite officials arrivng at Bangkok
airport  the previous day.

A former driver for Shell, who started his own transport company Mr.
Denis said: ‘As soon as I saw Simpson I shouted ‘There’s Derek
Simpson’.  There was no doubting it. I would know his face anywhere. He
was with the other man I saw at the airport. I watched Simpson recently
on BBC ‘Question Time’ with David Dimbleby.
‘Simpson looked me straight in the eye and they went purposefully into a bar called ‘Playskool’.
‘He however left the bar quickly after my son Lee followed him in.’
Denis said he and his family went into ‘Nana Plaza’ out of curiosity.
‘We did not like it. We felt uncomfortable’.  Added Hazel Simpson: ‘I
felt sorry for the women’.
Likewise Derek Simpson told the ‘Mail on Sunday’ that he also did not
like it and that he had also gone out of curiosity and did nothing
appropriate, but he described it as a ‘bit of an eye-opener’.
‘Actually it’s not my thing. I am a tad prudish.  I have been like that all my life.
‘I have never like being in pubs with guys leering over girls stripping
off their nurses’ uniforms. It’s just not my scene,’ he was quoted as
saying.
Women employed as dancers at the ‘Playskool’ are paid a basic Ãƒâ€šÃ‚Â£226 a
month, but they have to get paid out of the bar by at least nine
customers each month. The customers each have to pay the bar Ãƒâ€šÃ‚Â£12.34p
(600 Thai baht).
The bar deducts any loss of income below the target figure from the girls’ salaries.
They also have to get at least fifty Ãƒâ€šÃ‚Â£3 drinks a month from customers. For each drink they fail to get they are fined Ãƒâ€šÃ‚Â£3.
In effect it means that the bar owner does not have to pay much more
than Ãƒâ€šÃ‚Â£100 a month for each girls’ salary, and even less if nobody buys
the girl a drink. But a girl called Bee working there said: ‘This bar is
owned by an Englishman. Other bar owners require the girls go with
customers at least 12 times a month.’
Nevertheless dancers in Nana Plaza can earn significantly more than office workers in Bangkok.
Footnote:
Derek Simpson:
Salary:  Ãƒâ€šÃ‚Â£97,027 salary
Pension contributions: Ãƒâ€šÃ‚Â£27,000 pa.
Expenses: Ãƒâ€šÃ‚Â£38,340 accommodation and subsistence
Car: Ãƒâ€šÃ‚Â£24,480 – source The Sun.
But I rather think the Chairman of BA, a former union shop steward gets much much more.
Note: Comments similar those sent to the blog of a departed
British Embassy official such as:  ‘I saw him in Soi Cowboy with a US$5
dollar whore’ will not be accepted on this site of course. Nor is this
the place to discuss the merits or demerits of Thailand’s sex trade.
There are plenty of other blogs for this purpose.