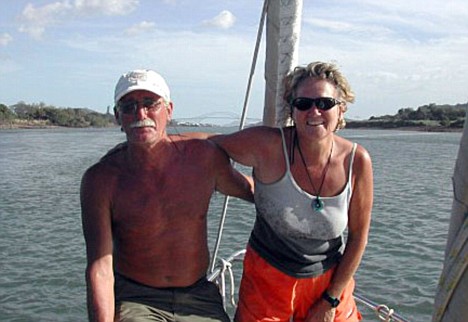 British skipper ‘murdered’ as pirates storm yacht off Thailand
From Andrew Drummond
Link to Guardian
Link to Daily Mail
Link to The Sun
Bangkok
A British yachtsman was reported today to have been beaten and
thrown into the sea when pirates boarded his yacht Mr.Bean off the coast
of southern Thailand.

Malcolm Robertson was allegedly beaten with a hammer before his body was
thrown overboard. At nightfall hopes faded for his survival. The attack
took place on Monday afternoon.
The Royal Thai Navy and Police called off the search last night, but it
is believed Mr. Robertson, was either already dead or unconscious when
he was dumped into southern Andaman Sea.
Thai police said the only apparent motive for the attack was to acquire the yacht’s tender – a small dinghy.
Mr. Robertson’s wife Linda survived with minor injuries after the
pirates, believed to be Burmese, fled when a Thai boat approached. She
was reported to have said: ‘They wanted the dinghy and started hitting
Malc about the head.’
Police Colonel Virat Ohn-song said: ‘We believe from out interview with
his wife that Mr. Robertson was dead before he was thrown into the
water.’
There was a lot of blood in the boats main cabin where the struggle took place.
Police seized three men they said were responsible for the attack, the
men, Burmese, were attacked by An angry mob onshore in Satun province.
Thais and Burmese have a long history of hostile conflict.
The retired couple from St Leonards, Sussex, were sailing their
U$440,000  44ft yacht Mr.Bean from Phuket, where the yacht was berthed,
to the Malaysian duty-free island of Langkawi.
The couple had previously sailed ‘Mr. Bean’  around the Mediterranean,
Caribbean, and through the Panama Canal, to the South Pacific, New
Zealand, Fiji, Vanuatu and Australia.
And they had planned to sail back to Britain later this year to
Eastbourne ‘Mr.Bean’s’ home port and were advertising on the net for
colleagues to join them in a convoy to the Red Sea.
Cases of piracy on yachts are rare off Thailand but the area is close to
where hundreds of Rohingya refugees from Burma, try to seek landfall,
after fleeing pogroms by the Burmese military junta.
The Thai government has been criticised by human rights organisations
for  beating up the refugees and sending the Rohingyas back out to see
in rickety boats without engines, and little food or water, leaving the
them to the mercy of the elements. Many have not survived.
That meant that seaworthy vessels in the area were worth more than their
weight in gold to anyone. But Thai police described the culprits as
‘migrant workers’ not refugees.
Last night Linda (Lindy) Robertson was being treated in a local hospital
and was reported to be devastated. The couple kept an internet
‘sailblog’ of their adventures.