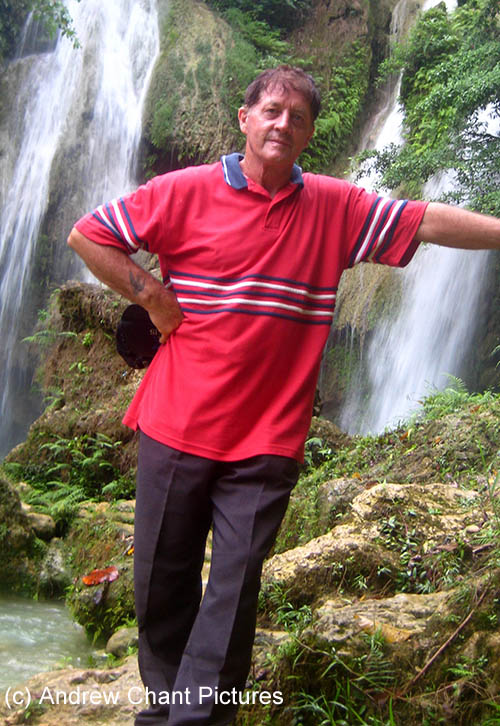 A Briton gunned down in the Philippines last month has been given a posthumous award for helping impoverished local people.

Anthong Nicholas a quiet but popular man. Was he the victim of tourism greed?

Anthony Nicholas, 64, has been awarded a ‘Certificate of Recognition’ by the Philippines Department of Environment and Natural Resources –  just weeks after he was shot five times in the back and then in his head near his home in Negros Occidental in a supposed robbery.

From Pinner, Mddlesex, he was man who fought corruption and land plundering, is now believed to have been killed, because greedy feudal barons were eyeing his land in the wake of a tourism revival.

Known as ‘Hi Jo’ by the locals, Anthony Nicholas, brought up originally in Pendeen, West Cornwall, had  been variously a Cornish tin miner, a gentleman pig farmer, a merchant seaman, and property developer,  and he owned half of the pristine ‘Hi Jo’ beach in Sipalay, which had been named after him.

‘My father was an industrious man who owned a local convenience store, a small beach   – and a farmhouse,  and who was loved by the locals because he respected their culture and spoke their language. He was the first white settler in Sipalay,’ said his son James, 28, who rushed from the house to try and save his father’s life.

‘We do not believe he was murdered for robbery. He had nothing on him. My mother offered what little cash she had for them to go away.’

‘Although he owned substantial he gave land to Filipinos even helped them build houses, and landscaped their properties.

‘He even got on with the guerrillas of the NPA, New People’s Army, who operated there until an Amnesty was signed with the government,  because they knew he was a good man’, James added from Tokyo today where he is a computer games producer.

Anthony Nicholas has been recognized according to the citation ‘in grateful appreciation and acknowledgment of his unselfish initiative for being environment friendly, contributing in invaluable actions and never ending activity of continuous planting and greening of the lots of Filipino citizens.’

He played Santa every year and last year provided Christmas lunch to over 200 local children.

He spent his time for over 40 years travelling between London and the Philippines, while his two sons and daughter were being educated in London.

But after Sipalay won a major local tourism award the family believes he became a target for ruthless feudal barons who rule much of the Philippines outside Manila.

Sipalay has itself been ruled by the same Montilla family for over 20 years and Nicholas was in conflict with the cousin of Mayor Oscar Montilla over ‘Hi joe Beach’.

The Montilla family control the local radio station, media,  the major construction firms and employment and government workers who vote against them tend to lose their jobs.

A week ago Mamerto Cortez, head of the National Bureau of Investigation  – NBI – announced that  the murder had been solved even before the assailants had been arrested.

A5E27CLater Claro Barcoma, a local bodyguard and employee of the local city hall was charged after he ‘made a confession to the NBI’.

Local sources say there are links between Mamerto Cortez, the Mayor and the Mayor’s cousin who wants to take over the beach.

The man arrested was a bodyguard and employee of the local city hall.  Four other accomplices were being sought.

But said London born James Nicholas: ‘No way was robbery the reason.  Everybody knew my father carried little money around with him.  The gunmen were not masked. They shot him several times and went back to finish the job.

Matlag Farm House. James Nicholas rushed from the house to try and save his father’s life

‘Everybody loved my father. He was cheerful, funny, and helped anybody he could. But he did take a stand on people plundering the country. People here are poorer than they were 20 years ago.’

Both the family and the local Human Rights Group Samahan Magdalo are seeking an independent investigation into the murder.

‘He was a good guy and gave a lot of jobs to the local people. He looked after them. We are really saddened and feel sorry for his wife and children.’

The family say they have had little help from the Embassy who have given them a list of security firms. Said James:  ‘They said that the Philippines was corrupt and ruled by the law of the gun.

‘People choosing to live there did at their own risk.  We do not want a list of security agencies. We want justice so the perpetrators won’t try the same thing again.’

A spokesman for the Foreign & Commonwealth Office however stated: ‘We can confirm the death of a British National on the 6 September in Sipalay City. Next of kin are aware and we are providing the family with consular assistance. We understand the Philippine police are investigating the death as a suspected shooting.
As our advice on the FCO website states: ‘Where there is evidence of suspicious circumstances we cannot investigate deaths ourselves….Please also be aware that the standard of investigative procedures and police expertise varies greatly around the world. We will however consider making an appropriate representation to the local authorities if there are concerns that they are not carrying out the investigation in line with local procedures.’

Last year in Maguindanao, some 57 people were murdered, 37 of them journalists, when a convoy of opposition politicians and journalists, was allegedly wiped out by the ruling Ampatuan family. Their graves had already been dug using a back hoe before the massacre.  The trial is ongoing in Manila.