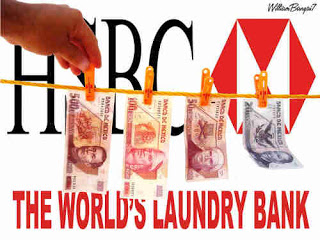 Once again dirty money has been laundered through HSBC Hong Kong, and once again the perpetrators are British boiler room scammers based in southeast Asia.

A European victims’ group has filed complaints to HSBC’s headquarters in London and Hong Kong accusing the ‘pirate bank’ yet again of money laundering for organised crime through its southeast Asia headquarters.

The Vienna based European Fraud Recovery Initiative (EFRI) is furious that the bank has been able to continue as before, accusing it once again of aiding organised crime.

This is despite being legally required to implement more stringent anti-money laundering operations. HSBC has had to pay out US$6.5 billion in civil fines relating to 59 breaches of banking regulations since 2000 – including, most notoriously perhaps, laundering for Mexican drug cartels.

The British government has also been repeatedly criticised internationally for its inability to act against the HSBC.

In the latest action, investigators have been able to access bank statements of the fraudsters showing high level withdrawals from accounts in Hong Kong taking place several times a day, This, they claim, should have immediately set off money laundering alarms. They have also identified bank officials whose names came up frequently in fraud account openings and transactions and other suspicious activity.

EFRI been liaising with a number of police forces for several months including Hong Kong, Malaysia and Singapore and files have also been sent to the Financial Conduct Authority in London.

EFRI identified 110 fake companies which had been set up in with bank accounts to receive the cash from boiler room frauds. Results showed that HSBC Hong Kong by far the bank of choice by organised crime groups who opened 33 accounts in branches there and a further six in HSBC owned Hang Seng bank accounts.

“We assume HSBC participated with the criminal organisations’

“We claim that HSBC either knew about the wrongdoing or at least wilfully acted negligent regarding the fraudulent activities within its enterprise related to the two fraud schemes.

Therefore, we assume that HSBC participated in an association-in-fact enterprise with the criminal organisations and made themselves accomplices in defrauding thousands of unsuspecting European retail investors.

“We assume that HSBC’s actions, namely the deliberate neglect of a legally required adequate set-up of a risk management system and other organizational units to prevent money laundering, were motivated by pure economic self-interest in order to gain a competitive advantage.”

The increasingly unattractive status of Hong Kong as ‘fraud central’ will not come as a surprise to Hong Kong’s bankers. Hong Kong Police and the media have given clear indications.

Back in 2018 the South China Morning Post warned that ‘thousands of bank accounts’ had been set up in Hong Kong to carry out fraud.

Money laundering in Hong Kong carries a penalty of 14 years imprisonment. Although some bank staff were arrested In January this year, they are believed to be comparatively low level. The bank was not named.

“It’s the largest case we have busted in recent years,” Yip Wing-lam, a superintendent at the commercial crime bureau, told the SCMP, adding it was the first-time local bank staff had been arrested for involvement in money laundering. A US$1 million was found in the public housing apartment of one of those arrested.

British boiler room scammers have operated with impunity in southeast Asia for over twenty years due to corruption within government and police, notably in Thailand, Indonesia, Malaysia, and the Philippines. The latest victims describe most of the scammers as English from the southeast, probably London, Essex and Kent scammers based in Malaysia and Thailand.

The Bangkok bosses of boiler room groups have been associated with the murder of ‘whistle-blowers’ or alternatively paying police to set them up on false charges such as drug possession and in one case with sex with a minor. (The man was finally released after two years in custody after the women in question admitted she was 26, not 17, and had been paid to make the allegation.)

After the Brinton Group boiler room scam in 2001 which took down Australians for over $400 million the telephone scammers were merely deported from Bangkok and allowed to return the next week. And the bosses were just fined for being in breach of Thai Securities Exchange Commission for trading without a licence.

Due to claimed failures by the Australian Securities and Investment Commission defrauded money, which had been frozen in Hong Kong Bank accounts was eventually released to the scammers.

HSBC was the most popular again when a variety of mainly Thai based boiler rooms targeted the UK the European between 2003 and 2012. Again the scammers were mainly also British, with a smattering of Australians, Canadians, New Zealanders, and Americans. An earlier victims group was called by the name Fraud Recovery Group (FRG). Between them the the EFRI and RFG victims have been cheated out of US$50 million.

In most of the recent scams a mainland Chinese national was used to open the bank accounts on behalf of a fake share trading company. Once the account was set up the Chinese director was replaced by a European.

Most of the accounts were set up using Hong Kong based fiduciary companies several of which feature extensively in ICIJ (International Consortium for Investigative Journalism) reports on families of world leaders including Chinese politburo members smuggle their cash offshore.

The scammers created fake companies and a web history of the companies using media such as Business Wire to plant fake stories of these supposed legitimate wealth management companies in the websites of financial publications such as Bloomberg.

They also created cloned websites of established financial media with genuine links to the real stories on the original sites while inserting complimentary stories about themselves.

They then proceeded to offer shares in the fake Fin-tech mainland companies in China and as such attracted a lot of interest.

In the recent pro-democracy troubles China has remained unconcerned about Hong Kong’s status as a financial centre. The Shanghai market is much larger and the island of Hainan is being opened up as a free port to rival Hong Kong.

All of this went over the head of a former boiler room arranger whom I contacted who fixed the receiving banks for the fraud cash. He said with a sigh:

“For the lack of stating the obvious, Hong Kong has been known as a money laundering centre created by the British since its inception. The banks know. The authorities know. I dealt with fiduciary companies. They knew and they did not care. Some of these companies were secretary companies and I had to fly to Hong Kong for the annual meetings. The fiduciary company took a percentage on all money transactions. Boiler room creators are merely using a set up created by figures of the establishment to hide their own money.”

Link to the EFRI statement.

Link to the Investment Scam Asia

Link to fraud of German national by these scammers