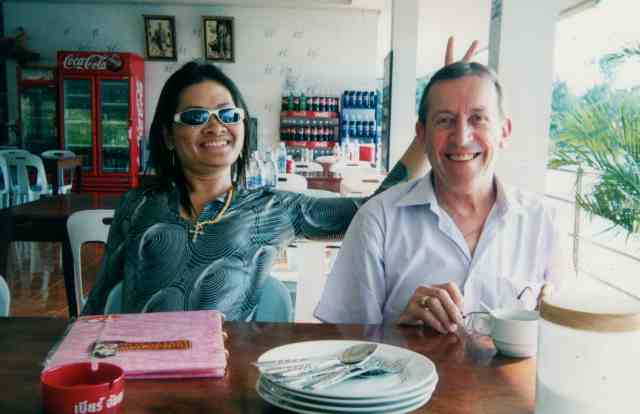 A Thai wife and her lover are to appear in court in Prachuap Khiri Khan later this month to face charges of setting up the murder of British pensioner Raymond Hind in the resort of Hua Hin in 2010.

Bunnag Hind, 40, nicknamed ‘Fon’ and her lover Tanakorn, will appear at separate hearings between February 21st and February 24th.  Bunnag’s brother Pomgrit, 40, the man police suspect actually carried out the killings is still at large.

Raymond Hind was 68 and terminally ill from throat cancer and constriction of arteries to his brain, when he was clubbed to death at his house in Hua Hin in the summer of 2010.

He had been attacked the previous month, also believed to have been at Fon’s instigation.

The latest developments, say sources in Hua Hin, follow the arrival of Hind’s daughter Zoe to take out a personal case against Fon, alongside police. British Embassy officials have been assisting the family seek justice.

The original arrest picture – wife – lover- and (inset)brother
Police are relying on phone records of Fon leading up to the time of the murder. She had left the house ostensibly to go to the early morning market and contacted people from there to establish an alibi. They have also been looking at bank records and business transactions.

There are also witnesses from the neighbours and a friend of Ray as to her actions at the house immediately after the murder.

Ray Hind from Cheshunt ran a successful garage business in North London.
Shortly after his murder a cousin of Fon contacted this site, through a foreigner, to say that she had worked at Fon’s bar in Hua Hin, and was convinced that Fon was behind the killing as she continually complained they she could not wait for Raymond Hind to die.

Murder scene: Hind’s marital home in Hua Hin
Said Benjawong Singtuen, 32, from Kamphaeng Phet province said: ‘I worked at her bar when Namfon told me she could not wait for Raymond to die. She said he had promised her 10 million baht and the business and bar were in her name. She continually asked him to buy her gold.’

‘She had a series of other lovers who were both Thai and foreigners’.

‘She had lived in England with Raymond, who was a very sweet man.  I left her bar. I could not stand her any more. He was very ill. He was dying anyway’.