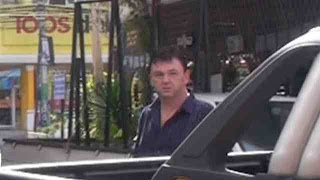 HE BOASTED HE WAS EVIL AND SNEAKY AND VILE

BUT NOW THE PRODIGAL SON HAS RETURNED TO HIS ROOTS.

Prodigal son Brian Goldie, known in Thailand as Brian Goudie where he was convicted and jailed for fraud, has now returned to the home of his father in Falkirk, Scotland, while two warrants for his arrest have been issued in the Thai resort of Pattaya.

Goldie, now 52, who re-invented himself abroad as a former Captain in the Royal Marines and a British barrister, has been re-united with his father, also Brian Goldie, a former parliamentary candidate for UKIP after a considerably dodgy 25 years.

In an enforced break in his crimewave he told a court in Australia, where he was jailed for 6 years, that he had an unhappy upbringing and that his father had beaten him, and his Scottish daughter did not want any contact with him. Whether that was true or just a court plea for sympathy, they have now been re-united. 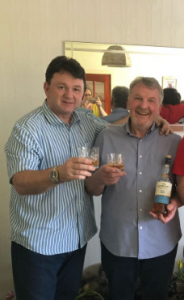 Payments of in the region of £10,000 made to the court for bail in Thailand after he was convicted and jailed for the theft of nearly US$250,000 from an aging American woman almost guarantee that the initial arrest warrant for skipping bail will not be translated into extradition proceedings.

Thailand has only ever once succeeded in extraditing a Briton back to Thailand for crimes committed there. That was the case of Lee ‘The Pitbull’ Aldhouse from Birmingham, who was jailed in 2015 for 25 years for stabbing to death U.S. Marine Dashawn Longfellow, 23, in a resort in Phuket.

The Thai justice system is reluctant to involve itself in cases of foreigners cheating foreigners, so they are happy to take hefty amounts for bail knowing the foreigners will flee and not be allowed back (unless they pay another hefty fine).

Brian Gerald James Goldie (Goudie) has had a long criminal career but has not gained the respect of ‘villains’ villains’ as most of his crimes have not been so much derring-do, but more of a sneaky type.

He summed up his own character in a smart phone SMS to one of his victims:  I am thorough  And vile And evil And sneaky And Ruthless. 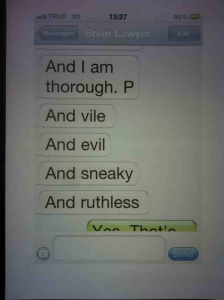 His life of crime allegedly began 25+ years ago when after working as a clerk at the Royal Bank of Scotland he set up an oil related company with two other Scotsmen Billy Harrison and Jimmy Cochrane to defraud the bank into investing in their company, which they pretended was full of orders.

All three fled to Australia with their cash and the arrest warrants were eventually withdrawn as proceeding with arrest warrants had become punitively expensive and the case nigh on impossible to prosecute.

He met a woman Julie Wiess, who later said that he claimed to be a a veteran of the Afghan conflict ‘but his war wound seemed to change from his chest to his groin’.  Both Ms Weiss and Ms Spence another girlfriend told the Australian Appeals Tribunal that Goudie has boasted to them how he defrauded the Royal Bank of Scotland.

In Australia he married Ms Weiss, it was alleged, to gain legal status in the country and on their break up was embroiled in a long drawn out battle with the country’s immigration department which had refused him a residence visa claiming he was ‘not of good character’. (All his immigration cases are recorded in detail in the annals of the Australian Department of Administrative Appeals.)

This was supported by the fact that at the time a warrant was till out for his arrest in Scotland and in Perth (Aus) he had been jailed for six years for ‘stealing as a servant’ after he had obtained a job with a mining company and started writing company checks to himself. He studied law in prison though did not gain any qualifications.

He took this knowledge and was relatively successful in delaying his deportation at one-point winning damages of AUS$20,000 plus for unlawful arrest and detention by Immigration officials.When time ran out however he relocated to Thailand changing his name to Goudie as the name Goldie along with pictures of himself were now on the internet. 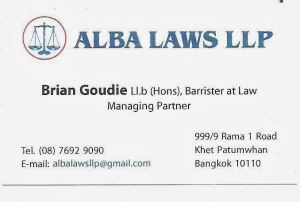 As the re-invented Brian Goudie he claimed to be a former officer in the Royal Marines and a qualified barrister able to practice in both England and Scotland. He set up a law company in Thailand called ‘Alba Laws’, using a Thai bar girl as his Thai nominee (Foreigners cannot practice law in Thailand. Thais must own at least 51 per cent of shareholdings).

He initially sought out foreign but mainly British clients with property problems and found cheap Thai lawyers to represent them, while claiming barristers’ fees of up to and over £1000 a day. (His Thai lawyers were paid less than £100 and generally had no other work).

He also obtained other foreign clients by trawling jails during visiting hours, guaranteeing prisoners their liberty at a price and his first major success was with Ulster drugs trafficker Jimmy ‘Doc’ Halliday who was in jail in Pattaya on assault charges and suffering from the debilitating flesh eating disease necrotising fasciitis.

He managed to get Halliday out of Nong Plalai prison in Pattaya for treatment at the Bangkok Pattaya Hospital but not until the case had already been diagnosed as terminal and the jail was anxious to have Halliday out of their hands.

Once in the hospital, supposedly as security for his treatment costs, the barely conscious Halliday signed over his power of attorney to Goudie’s ‘Alba Laws’ with a thumbprint.

In Britain Halliday had been subject to confiscation order granted at the request of the Serious Organised Crime Agency, but prior to that he had squirreled a large amount of cash to Thailand.

On his death and using the Power of Attorney Goudie seized all Halliday’s remaining assets which included a pub and guest house called ‘The Blarney Stone’ and a condominium.  Goudie renamed the pub ‘The Jaggie Thistle’. Halliday’s Thai girlfriend subsequently took her own life. She had been refused access by Goudie to visit Halliday in hospital and Halliday, she claimed, had promised to look after her in his will.

Goudie also succeeded in extracting some US$250,000+ from an elderly American woman Barbara Fanelli Miller, then 86, for legal costs and bail for her son Ian Miller who had been arrested on child sexual abuse charges. He had promised her he would get her son back home to Madison, Wisconsin.The justice system in Pattaya is not unknown for taking for taking under the counter payments for the release of prisoners. In fact the arrest of alleged child sexual abusers in the resort had for some officers become a lucrative trade. Many never made it to court. But in this case negotiations failed. Barbara’s son, aged 43, died in jail.

She wrote to the author:

“With my broken heart, and trembling hands I write this. My only son is gone and I loved him tremendously. I can fight no longer. Nothing will bring Greg home. To save myself, I have to be done with this nightmare and try to focus ahead for me and it is what Greg would want me to do. I can fight no longer. The pile of injustice in Thailand is way too high for a 78 year old lady to cope with. I have been over my head for a very long time and I’m exhausted from treading water. I’m done.”

It was for this fraud that Goudie was later sentence to jail.

When Goudie’s history came to light he was exposed on this website and by the author in a story for the Sunday Mail in Scotland.

This seriously affected Goudie’s business and he was forced to sell the ‘Jaggie Thistle’ but could not do so because it was now in the name of a Thai girlfriend whom he had ditched and who had been further angered because it was her who had been taken to court and fined for not having the proper licenses to run the pub business.

Cornered Goudie struck out in the only ways he could. He took up alliances with two other dubious foreigners in Pattaya, Drew Walter Noyes from Wilmington, North Carolina, who had been exposed in the Wilmington ‘Star’ newspaper and in Thailand also re-invented himself as a lawyer, and Scot David Hanks, former owner of Masquerades brothel in the suburbs of Melbourne, Australia. Both had been exposed on this site.

Between them took a series of SLAPP cases under Thailand’s Computer Crime Act against the author of this site. Goudie sued for allegations made in the Sunday Mail and took cases against his former Thai girlfriend for theft from the ‘Jaggie Thistle’. All Goudie’s cases failed. But SLAPP cases are not taken to win. They are taken to drain the victim’s finances. Thailand does not awards costs unless the victim counter-sues.

Noyes eventually fled Thailand in the same was as Goldie (Goudie) after being sentence to jail for extortion. (Arrest picture above)

David Hanks, who also appeared in the Scottish media is believed returned to Australia

Goudie thereafter became an internet warrior creating webpages such as Casewatch Asia posing as an expert surveying the local legal scene. All these were rants accusing the author of being a ‘fraud and a criminal’ (sic) and other perceived enemies, who were otherwise mainly former clients and associates.

Goudie had struck rock-bottom and he was never able to recover. Prior to his return he had fled Pattaya to a secret address in Bangkok.

Although several reports have reached this website of his appearances in Glasgow and Saltcoats in Ayrshire, confirmation has now come from the Twitter site of his father who is also a Junior Vice President of the ‘Robert World Burns Federation’ and is very busy annually at Rabbie Burns suppers addressing the haggis.