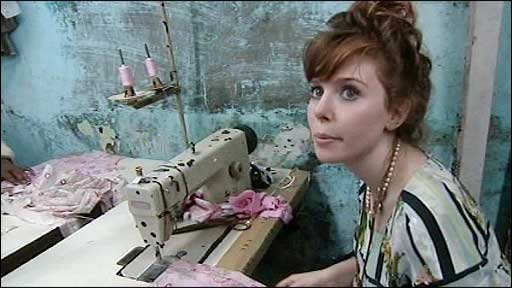 FROM ANDREW DRUMMOND
BANGKOK
March 29 2011
I am not sure whether the BBC bothered to get all the required permissions but as Thailand this year is being promoted as a foreign film hub perhaps the boys and girls from the corporation managed to slip in under the counter during the celebrations.

Living the agony: Stacey working in a sweat shop
Last night in Britain the BBC brought us: Thailand: Tourism and the Truth – Stacey Dooley Investigates!
This is one film which will not be promoted by the Tourist Authority of Thailand.

Stacey of course first came to Thailand as part of the series ‘Blood Sweat and T-shirts’  a look at clothing sweat shops and sister series to ‘Blood, Sweat and Take-aways’ – a look at where ‘our’ food comes from which reduced some Brits to shaking wrecks after working a week in a Thai rice paddy.

More recently Stacey did a programme on child prostitution in Cambodia. Stacey, 22, is a likeable child of nature, or as the BBC says, a typical girl next door, who used to work behind a cosmetics counter, until the Beeb picked up on her natural charm.  She cries on camera when she is upset and equally when she is happy she shows it too.

Continuing her investigations into the Third World
While sometimes she shows great naivety using Tracey is not a bad approach to tackling old but on-going stories. After all, many of us are so used to exploitation and abuse in the region that it needs someone with a thinner skin to take a fresh look.

Anyway said the BBC pre-broadcast blurb: ‘This time Stacey is travelling to one of our favourite holiday destinations, Thailand, to explore the darker side of tourism that the average holiday maker doesn’t see.

‘Stacey begins her trip in Phuket, where she stays as a tourist before swapping roles and becoming a hotel worker. She works as a chambermaid and struggles with the hard work and incredibly high standards, having to clean 14 rooms a day for just four pounds. She also discovers what it’s like to live on such low wages and the sacrifices that some hotel workers have to make. Many live in slum conditions or in hotel dormitories, separated from their children for months.’

Well what Tracey found was, according to the Guardian, ‘brutal working conditions Mickey Mouse wages, rats. And locals being forced away from the homes they’ve always lived in by the inexorable spread of tourism.’

The 22-yr-old even got a Deputy Prime Minister to promise to take care of the sea gypsies, many of whom had their land taken from them after the Tsunami.

We should send Tracey out after the jet-ski scammers, the tuk tuk and taxi drivers et all. Well, er maybe not.

But will this bring down hotel prices on this holiday island to be more commensurate with the owners’ wages bills. Let’s not bet on it.