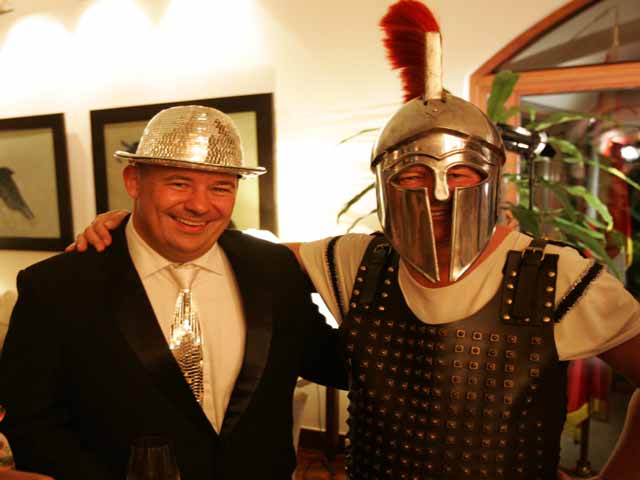 Followers of the BBC’s Alastair Leithead will not be in the least surprised to know that ‘Al’ has gone Hollywood, after a mild but recurring case of ‘gone troppo’.

Al and yours truly
Used to dodging bullets in Afghanistan Alastair is possibly the BBC’s most sartorial correspondent with a wide range of helmets all designed to match his hair.
Appropriately he has pledged his armour to andrew.local so I popped along to see him at the weekend when he had his leaving party at the house of His Excellency Ron Hoffman, Canadian Ambassador to Thailand.

Al with girlfriend Anna in shimmering dress and Princess Wotsit from Star Wars
This was a Hollywood theme party. Alastair kindly me lent me his Roman centurion uniform but I went as Spiros Kopaloadothis, Achilles’ best pal.
The BBC’s ‘Becky’ (Rachel Harvey’s producer) came as Michael Jackson, Shrek was there, a couple of Star Wars characters; there seemed to be half a dozen James Bonds, all looking like Johnny English.

Ambassador Hoffman and bevy of ‘luvverlies’
My colleague Andy was the official photographer. He’ll do anything for a free drink.
The British Ambassador Asif Ahmad dropped  in to say,  not for the first time, that  he does not follow himself on the net, but his best friend does that for him.
‘All the stories you have written (about me) are still on the first page of Google,’ he adds.

I
I wondered which of Tim Johnston, of the FT, or Marc Laban, of Asiaworks TV, was wearing a wig. But then found out they both were.
Julian Haddon (ITV) also had a wig (I think he came as Denis the Menace)  which ended  up on Andy’s head at some stage.
All in all a good night for the follicly challenged.

Lady Gaga, with hair made to match my helmet, self, and Canadian Ambassador’s wife
I moved on as ‘The Big Chilli’s’ Colin Hastings made a beeline for the Ambo making the passing comment: ‘I bet you have to wear that on all your jobs’  (The suit of armour)
As the Canadian Ambassador was constantly surrounded by a bevy of’ lovelies’ I headed for his wife and suggested we nip off to a quiet bar up Sukhumvit.
I did not hear her reply.  By this stage the wine was kicking in.

Julian Haddon ITV (left)
Lots of totty there but alas to say  I did not catch one making a sneaky glance at me in my armour and captivatingly short tunic/toga  or whatever  Sophocles or Homer called these things.  (Homer, the poet that is, not Homer Simpson)
Anyway Alastair is of course moving to LA.  So to get into the mood he put on a pretty good performance as  Austin Powers.
LA is the place from which the BBC likes to cover South America from.  Well it is in a neighbouring continent.
I did make it to that bar up Sukhumvit , well half a dozen apparently.  But still nobody wanted to know what was under my toga.
Bye bye and good luck Al and Anna
Oh!,  and welcome to the new website. We’re getting there.