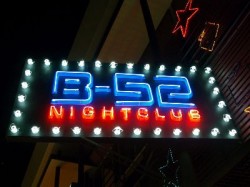 Pattaya’s infamously dead pan local media, which faithfully follows their local police,  have been slavishly reporting, the recent arrest of 11 Russian prostitutes in the B52 club complex in, according to the Pattaya Daily News,  ‘Pattaya’s infamous Walking Street’.

The raids conducted by Chonburi Superintendent, Pol. Col. Worawit Waitanormjit,  if your read the PDN, or  Police Lieutenant Colonel Rangsalit if you watch Pattaya One TV, were carried out after police ‘acting on tip offs’ put the club under surveillance.

This club was just recently opened in a fanfare by Pattaya’s Deputy Mayor, Ronnakit Ekkasing.  As Russian girls have been working in clubs in Pattaya for years and even dance in little glass booths on the infamous Walking Street (and on Youtube too)  if the police have not noticed, they must be, well er…………….have been paid not to!

Actually the video put up by the Pattaya Daily News is hilarious. In it the girls seem to be taking the mickey a little bit.

They know what has been going on but evidently the Deputy Mayor noticed nothing untoward.

At the police station they burst into a rousing chorus of ‘Katyusha’, sung better here however by the the Russian Red Army choir and boyband Chelsea, and or here  where you can boogie with the Tolmachevy child star sisters. Katyusha is a patriotic song,Russian women sending their love to the soldiers on the front line during the Second World War. Katyusha rockets were also the Soviets’ World War 11 World War II vengeance weapons.

The girls are are happily signing their confessions, and it looks like the new boss will have to send home for re-enforcements.

I rang the club and asked what the problem was. The woman on the end of the phone replied in Russian: ‘A bad dancer always has trouble with his balls’.

I am awaiting for some clarification.