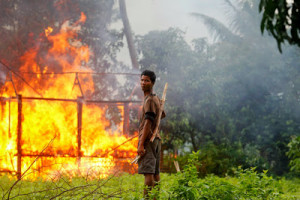 An ethnic Rakhine man holds homemade weapons as he stands in front of a house that was burnt during fighting between Buddhist Rakhine and Muslim Rohingya communities in Sittwe June 10, 2012. Northwest Myanmar was tense on Monday after sectarian violence engulfed its largest city at the weekend, with Reuters witnessing rival mobs of Muslims and Buddhists torching houses and police firing into the air to disperse crowds. Picture taken June 10, 2012. REUTERS/Staff (MYANMAR – Tags: RELIGION CIVIL UNREST)