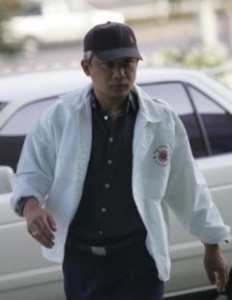 Police officer Somchai Wisetsingh walking into court in Kanchanaburi, Thailand before testifying. He is accused of killing British backpackers Adam Lloyd and Vannessa Arscott in September 2004.

He told the court that a mysterious Mr Ya had picked him up after he was knocked unconscious by Adam Lloyd during a fight and that he presumes Mr Ya then killed them.