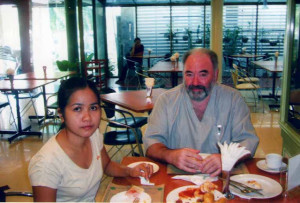 Koranit Chuangchai, 33 and Briton David Farrell, 72. Mr Farrell died in suspicious circumstances at his home in Sathahip, near Pattaya, Eastern Thailand. He had divorced Koranit months earlier but she still believed she was entitled to everything in his will. In fact he had changed his will 4 days before his death, leaving her nothing. Police are investigating Mr Farrell’s death.