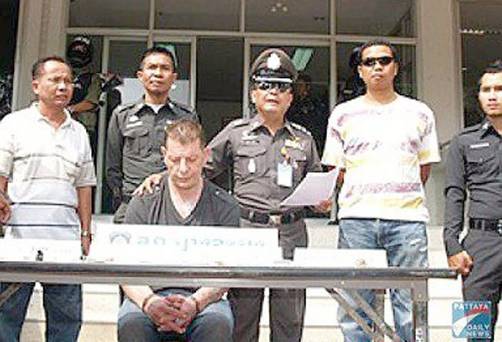 An Irishman faces a death sentence in Thailand after being arrested today dealing in a cocktail of drugs in a beach resort.
Thomas McAuley, 48, was caught in a sting operation in the Thai
resort of Pattaya, 100 miles east of Bangkok.  Thai police say he was
dealing in crystal ice, methamphetamines known locally as ‘yaa baa’ –
the mad drug – and also opium and cannabis.
McAuley, born in Belfast but an Irish passport holder, sold drugs to
teenagers in the resort city, said Police Colonel Somnut Jutkate. ‘He
dealt the drugs from his Toyota Fortuna (SUV).  After receiving
information we put him under surveillance.’
Thai police used an informant, to buy a quantity of ice valued at 6000 Thai baht. (130 Euros  Ãƒâ€šÃ‚Â£115)
When he was arrested McAuley had 109 grams of crystal ice in his
possession, in two packets. Seven tabs of methamphetamine, 11.4 grams of
cannabis, and 12 grams of opium.  He also had a set of scales, and 60
bags for packing his drugs in.
He also had on him 52,000 Thai baht (Ãƒâ€šÃ‚Â£1107/ Euros 1,124) as well as the
6,000 provided by the informant, believed to be one of McAuley’s
clients.
‘He is a major drugs dealer in Pattaya, ‘said Police Colonel Jutkate.
McAuley has been charged with trafficking in class 1 and 2 drugs.
The charge of trafficking in Class 1 drugs carried the death sentence in
Thailand, although this is invariably commuted to life imprisonment for
westerners.
But in a ‘War on Drugs’ initiated by Thailand’s ousted Prime Minister
Thaksin Shinawatra in 2003 over 2,000 people were gunned down by police
in what Human Rights agencies have called ‘injudicial killings’

If convicted McAuley will serve his sentence in Bangkwang Prison, Bangkok, known as ‘The Big Tiger’.
People convicted on drugs charges cannot apply for parole, or pardons.