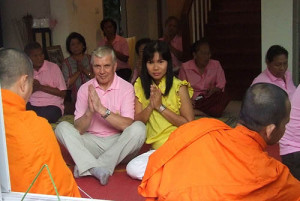 Thai journalist Kanokrat Nimsamoot, 41, at her ceremonial Thai wedding to Scottish kiltmaker Dennis Booth,67. Kanokrat was jailed for a day and deported from the UK after Booth told authorities their marriage had broken down. She is now a TV personality advising Thai women on the perils of marrying westerners.