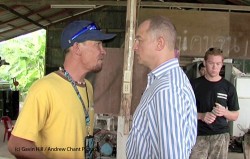 Thai authorities have arrested the leader of a Thai mafia gang
and charged with him with extortion based solely on the evidence of a
British television documentary.
Police today were holding a Thai known locally a JJ Naiman, aged 27,
after he was seen on a British television programme trying to
extort over Ãƒâ€šÃ‚Â£1000 from a British Royal Marine who had rented a jet-ski
on the holiday island of Phuket.
The province’s governor Wichai Praisa-nob also stepped into the row
today and called a meeting of police, jet-ski operators, Marine Police,
and local government officials to discuss what action would be taken.
They are also to be shown the film. He said he was considering banning
jet skis from the island.
The British documentary ‘Big Trouble in Thailand’, which went to air on
Monday on the Bravo Channel, showed Royal Marines, who arrived in
Phuket on HMS Bulwark, after a tour of Helmand Province, Afghanistan,
being held at gun point in a local boat yard run by local mafia.

The row was only resolved after the arrival of Marine Police Sergeant
Tim Wright who defused the situation but not before exposing the Thai
gangleader  as a ‘corrupt crook’.  The Marine Jack Tebbott, 21, from
Leicester (right) eventually paid just over Ãƒâ€šÃ‚Â£600.
Tim Wright said: ‘These men openly threatened serving military personnel
whilst on R&R in Thailand. The important thing is that I got them
out of there with no one being hurt, other than pride and in the wallet.
I don’t remember swearing but apologise if I did! The other important
thing to remember is don’t hire jet skis in Thailand.’
The jet-ski con is widespread. Tourists are forced to pay for damage
which they clearly have not created, but the mafia gangs have had
assistance from corrupt police officers, who, according to one source,
claim 20 per cent.

Copies of the programme are now widely available on the internet.
Further programmes could also embarrass Thailand.  A well known police
rip-off on the island of Koh Phangan where police collect Ãƒâ€šÃ‚Â£10,000 every
month from tourists

on minor drugs charges on the threat of having to go to jail pending trial, is already getting exposure.
The boyfriend of one girl arrested says he received a demand to find
Ãƒâ€šÃ‚Â£1,400 for possessing a small amount of cannabis, others had to pay
more. For normal Thais the fine can be as little as Ãƒâ€šÃ‚Â£50.
And a similar jet ski scam will also be exposed on the Thai island of Koh Samui.
British Producer Gavin Hill said: ‘This was not designed to be an
investigative programme. We just filmed what was going on in front of
us.’
He said however the next programme in the series probably reflected more on bad British behavior than that of Thais.
‘I am a little surprised at the big reaction now. This seems to have been going on for a long time.’
JJ Naiman has been refused bail. Allegations that he had been paid to
help set up the scene were described by Gavin Hill as ‘hardly
credible’. ‘We had to cut a lot of the footage. I am satisfied that what
was presented was the absolutely correct portrayal of the situation.  I
have not taken any side.’