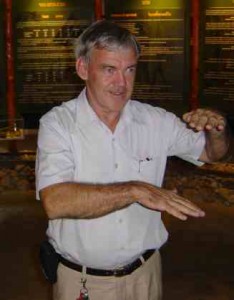 The historical adviser to the film ‘The Railway Man’ said he hoped to clear the mystery  of Britain’s ‘unknown soldiers’ buried in the war cemeteries in Thailand and Burma at the close of the Second World War.

Rod Beattie, director of the Thailand-Burma Railway Centre, and representative in Thailand of the Commonwealth War Graves Commission said he had hoped to identify 300 British servicemen who died while in captivity with the help of the Ministry of Defence.

“Remarkably the records kept of the deaths have been very good, because the military are efficient at these sort of things.  Now we are close to having a complete record.”

Mr. Beattie has also identified and located where just about every prisoner currently buried in war graves in Kanchanaburi Thailand actually died. He believes the final secrets still remain in the vaults of the Ministry of Defence in London and has asked for a search.

“It has come to the stage that we can show sons and daughters and grandsons and daughters where their father or grandfather died. We can even put together their history on the railroad and which camps they worked at previously and how they died.”

One such person who has re-traced the footsteps of his father and uncle was Australian Gary Gibbs whose father and uncle, both from Toowoomba, Queensland, worked on the ‘Death Railway’.

His father Sapper Albert Edward Gibbs of 2/11 Field Company, Royal Australian Engineers was captured in aTimor and after a spell in Java was taken to the railway in January 1943 with the Dunlop Force – named after Weary Dunlop, the famous Australian doctor who administered to the sick. He survived.

But Albert Gibbs’ cousin Staff Sergeant Frank Osborne Gibbs QX16517 2/26 Battalion AIF arrived on the railway with ‘F’ Force at the peak of the worst period when soldiers were forced to work 60 out of 72 hours.

Gary Gibbs and his wife met and Nicole Kidman on the set of ‘The Railway Man’ Colin Firth was introduced to Gary Gibbs from Toowoomba, Queensland, who in fact had just completed ‘pilgrimages’ to the spots where his father and uncle died.

In doing his research Rod Beattie has been able to put the lie to many myths about the infamous railway which was torn down by the allies in disgust at the end of the war.

Not true, says Mr. Beattie, himself an Australian from Queensland.

“The death rate at say places like Hellfire Pass were British 20.6 per cent, Australian 21 per cent and Dutch 16.5 per cent. The Dutch prisoners survived better because many of them were actually Indonesian”.

Nowhere do the statistics support this claim.

‘The Bridge on the River Kwai’ film and novel was based on the bridge over the River Kwae in Kanchanaburi Thailand.

Not true. The bridge in Thailand now known as the ‘Bridge on the River Kwai’ is actually on the River Mae Khlong – The Thai authorities changed the name of a stretch of the river to ‘Kwae’ to create a tourist attraction.

In fact the railway line did not cross the river at all, just endless small tributaries, as it ran parallel to the river Kwae Noi and went past the river source into Burma. There were hundreds of small bridges of the simple trellis type – none with any spans.

Around 70 Australians were beaten to death at Hellfire Pass?

Again there is no evidence to support this at all, insists Beattie and the Australian authorities know this as they have similar records of deaths of servicemen.

This statistic comes from a comment by an Australian officer in the official Australian history of the Death Railway, but it is not based on known facts and there is a plaque to support it at the Australian sponsored Hellfire Pass Museum.

“In fact what happened at ‘Hellfire Pass’ does not stand out from other places on the railway.

“The Australian authorities refused to let the crew film at ‘Hellfire Pass’ I do not know why.

“But the cutting at which they eventually filmed at Tanpii was as severe if not more than ‘Hellfire Pass’.

“I’m not being unpatriotic by saying this. What happened on the railway was horrific. There is no need to embellish the horror.”

Rod Beattie is probably the only person to have walked and hacked his way along the entire 200 km track of the railway in Thailand, and also, unofficially, part of the Burmese side too.

In fact Royal Signals Lieutenant Eric Lomax spent most of his time at a special camp in Kanchanaburi fixing trucks and equipment.  But fixing them, he says, to break.

His personal hell came after the Japanese discovered he and his friends had been making radios. They also caught him with what was considered to be an ‘escape’ map. He was severely beaten over 90 per cent of his body resulting in broken ribs and wrists.

He was also given water torture. Nagase Takashi his torturer’s interpreter later served under an Australian Captain as Commonwealth troops scoured the camps looking for graves of allied soldiers.

A number of Japanese were sentenced to death for war crimes on the Burma-Siam railway, but few of them did more than ten years in jail.

Eric Lomax, now 92, is one of the very few who came to terms with his former enemy.

Descendants  of victims of the Death Railway can make arrangements to learn more about their fathers and grandfathers through the website www.tbrconline.com. Then click on Pilgrimages.

Mutiny on the Death Railway