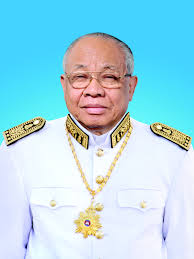 Human Rights Watch says that the death this week of Chea Sim former President of the Cambodian People’s Party, and like Cambodian strongman Hun Sen, a former battalion commander in the Khmer Rouge, should spur people on to make renewed efforts to bring the remaining Khmer Rouge leaders to justice.

HRW says it is a ‘mockery of justice’ that Chea Sim should have served in the post-Khmer Rouge Cambodian leadership (along with Hun Sen I guess) when he was implicated in arrest, torture, etc. in the Khmer Rouge’s Eastern Zone Sector 20.

This is of course Asia and the new AEC (Asean Economic Community) which comes into being this December will no doubt be full of characters with dubious pasts, and dubious presents for the matter. All the East appears to need to appease the west is tell a couple of fibs (atrocities are still carried out in Myanmar/Burma with appalling regularity) and the west’s businessmen are in there dealing.

Britain’s only Khmer Rouge victim John Dawson Dewhirst, who was brought up in Cumbria was seized on the boat  ‘Foxy Lady’ in Cambodian waters in 1978 and taken eventually to the Khmer Rouge’s torture and execution facility in Phnom Penh, known as S-21 (Toul Sleng) – previously a school.

The man who captured him remains free as of course do those who killed him.

Chea Sim, who oversaw districts where numerous atrocities occurred and then presided over a police state after the Khmer Rouge was ejected from power, died on June 8, 2015, in Phnom Penh.

Chea Sim was among the many former officials of the Khmer Rouge who have never been investigated for serious international crimes, including possible charges of genocide and other crimes against humanity, committed during the Khmer Rouge regime from 1975-1979.

“Chea Sim’s passing is a reminder that virtually all former Khmer Rouge officials have gone unpunished for the millions of deaths and incredible suffering of ordinary Cambodians during Khmer Rouge rule,” said Brad Adams, Asia director at Human Rights Watch. “It is a mockery of justice that Chea Sim could serve in the post-Khmer Rouge Cambodian leadership for decades without ever facing an investigation, much less arrest or prosecution.”

Research conducted for Human Rights Watch in 2005 found evidence that Chea Sim was implicated in serious crimes in his capacities as secretary of the Khmer Rouge Party Committee for Ponhea Krek District of East Zone Sector 20 and as a member of that Committee from 1975-1978.

Chea Sim, like other Khmer Rouge district party secretaries, oversaw a district security office and exercised authority over commune militia forces that directly committed torture and execution of people who were arrested on these various grounds and held without charge or trial. As a district party secretary and member of the higher-level sector committee, Chea Sim was implicated in the alleged enslavement of the population in these areas of the Khmer Rouge East Zone.

This and other evidence against Chea Sim was presented to the United Nations-supported Extraordinary Chambers in the Courts of Cambodia (ECCC), the tribunal created in 2006 to bring to justice “senior leaders” and others “most responsible” for Khmer Rouge crimes from 1975-1979.

However, the evidence was not seriously pursued because of the political control exercised over the court by Prime Minister Hun Sen, himself a former Khmer Rouge member, and the CPP, in which many former Khmer Rouge play significant roles, especially in the armed forces and local administration. This same political interference continues to stymie prosecution of other former Khmer Rouge who held positions of responsibility similar to Chea Sim from 1975-1979.

After the Khmer Rouge government was overthrown in January 1979 by a Vietnamese invasion, Chea Sim was named minister of interior in the newly installed Cambodian government. He held this post through 1981 and in this capacity helped oversee the creation of new security forces, including police and intelligence units, and the establishment of new prisons throughout Cambodia.

The objective of this new system was to repress all opposition to the new government, including armed insurgencies, nonviolent opposition groups, and individuals engaging in peaceful dissent.

Arrests on political grounds were routinely carried out, detention was almost always without charge or trial, and prisoners were often held indefinitely on the basis of unsubstantiated or false allegations. Confessions were frequently obtained through torture. Torture was facilitated by holding prisoners incommunicado while undergoing interrogation, completely isolated from the outside world and even from fellow inmates, and often in “dark cells.”

After officially leaving his post as minister of interior, Chea Sim remained among the most important officials in Cambodia for the next decade, identified by ruling party colleagues as the most powerful leader of the faction of the party in charge of internal security, the police, and prisons.

As minister of interior, Chea Sim also helped to protect and place fellow former Khmer Rouge into positions of authority in his ministry, the security forces, and the local administration. This was part of a process of protecting those responsible for Khmer Rouge crimes from scrutiny, which Chea Sim himself enjoyed and embodied.

“Chea Sim was best known among Cambodians for running the police state in the 1980s that imprisoned and tortured people for peaceful political activities,” Adams said. “His legacy continues to this day, with unreformed security forces run for the interests of the ruling party instead of the public good.”