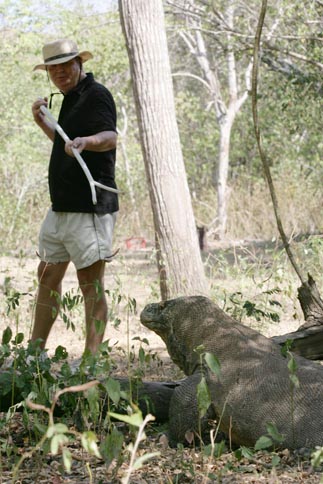 So here I am face to face with a Komodo Dragon on Rinca Island in Indonesia where three unfortunate Brits along with a Swede and a Frenchman were washed up after their dive boat went off without them.
But no need to worry. The park rangers gave me this white stick when I arrived on the island and said just catch them by the neck if they approach.
Well I guess the neck on this one seems a bit small for my stick, but fear not, these guys only eat carrion according to our very own Jeremy Clarkson writing in the Sunday Times.
There’s a blessing.
What he forgot to say is that the carrion they eat is normally only carrion because they’ve bloody well killed it in the first place.  Water buffalo, deer and even humans can die a slow lingering  death from the bacteria in the saliva of these foul mouth monsters. And I’m sure deer run run faster than I can.
Komodos, when enthusiastic, can run at 20 m.p.h. I think I can do that but not for the full hour.
Here’s what to do if you get bitten by a Komodo on Rinca Island. Get on a boat quick. Its a two and a half hour journey to Labuan Bajo on Flores home of Indonesia’s Hobbit people. Wait for a plane and hope its not one of those days they dont fly, or at least if they do fly,  hope you can bump someone from the flight.  This will be difficult because by now you’ll be sweating, your face will be contorted, and you’ll be looking like a potential terrorist and your attempts to say ‘I’ve been bitten by a Komodo’ may be misinterpreted. If you succeed, get yourself to a hospital in Bali a one and a half hour trip over the Indonesian archipelago..
The only cure for a Komodo bite is a Fokker.

But wait a minute. I’m not the only fearless hack here. The Daily Mail have apparently given my Sydney based colleague Richard Shears a knighthood for tackling the same Dragon.  Notice that stick he’s carrying. ITS MINE!.  (more here) . Apparently the Komodo is called ‘Beth’. Its amazing what the Daily Mail can pull out of the bag.
(Pictures of fearless white stick courtesy of Andrew Chant, c/o  i.c.u. Bali international hospital)
Anyway back to Jeremy.
Jeremy’s column in the Sunday Times headed ‘Swim with sharks – Its easy money’ was a frivilous knocking piece on the story of two sets of divers who were left recently in ‘Open Water’ by their dive boats. (see this website)
The first couple Richard Neely, 38, and his American girlfriend Alysson Dalton, 40, spent 19 hours floating above Australia’s Great Barrier Reef before being rescued.
The others, including Britons Charlotte Allin, Jim Manning and Kathleen Mitchinson eventually floated up on Rinca island off Flores with the Komodos.
Jeremy,  regarded in Britain as somewhat of a ‘man’s man’,  noted that in warm water areas the size of the sharks would hardly classify as a ‘hungry man’s starter’. This even though British newspapers – as they always do when talking about any seas further away than the English channel – described both incidents as taking place in ‘shark infested waters’.
It’s been done to me several times by sub-editors in London.
SUB: ‘Well are there sharks there or not ?????
Me:’Yes. There are Reef sharks, black tipped ones, leopard sharks, lovely little ones with spots etc.’
SUB:’Well they’re in f…king shark infested waters aren’t they?  (pause)  Are’nt they!!???.
How can you argue with that. It doesn’t matter that the sharks, sit, roll over and beg, and eat morsels from your hand, and off Thailand ‘wai’, nick your small change and sell you fake gems, and ‘go short time’.  Still ‘shark infested waters’ paid for my holidays when Leonardo di Caprio sank while filming off the island of Phuket.

Anyway Jeremy wrote:
‘How’s this for a money-making idea? Simply go on a scuba-diving holiday and get lost. Obviously, you don’t want to be getting, ahem, ‘separated from the dive boat’ in Norway. Or in a gravel pit in Wakefield. It’s best to go to a place where the sea is warm. This will make your ‘ordeal’ quite comfortable. And as an added bonus there will be sharks, which will sound great after you’ve been miraculously rescued and your story is appearing in Hello! magazine’.
He then muses on wittily suggesting that the survivors’ stories were not the ordeals they were cracked up to be.
On the Komodo: ‘They made it go away by throwing pebbles at it!’
On what prospective drifters should take with them:
‘Things to pack? Well, obviously you’ll need some sandwiches so you have something to eat while you wait for the dive boat to go away. You’ll also need some sun cream, a torch, a portable sat nav system, a harpoon gun and some condoms, in case one of the pretty girls falls for the ‘Well, since we’re going to die, we might as well’ line’.
Well on my deathbed might be one occasion on which even I might definitely forget the condoms.
He goes on…Who you should have in your party
‘No mingers. The girls must be prettier than a Caribbean sunset, partly because Hello! is not going to put someone who looks like Ann Widdecombe on the cover’.
Hmm. Chav Jade Goody of ‘Big Brother’ fame  and Britain’s most famous minger didn’t do too badly as a cover girl.

The men, on the other hand, should be big and strong so that they can deal with any unfortunate attacks by cannibalistic fishermen or Portuguese men-of-war. But, critically, one must be a concave-chested prat whom you don’t like very much. Because someone has to come home with a half-eaten head, after all..

Where not to do it.
‘Don’t, whatever you do, get yourself lost miles from land in some two-bit Third World backwater where all the rescue-boat captains are on heroin.
I’m not sure I would care if my rescuer was addicted on heroin. I think I would support his addiction for the next six months.
And finally he says:
I do hope my simple guide to making a fortune while on a lovely holiday in the Indian Ocean will come in handy this summer. Because the only way you’ll make more money is by sleeping with Wayne Rooney. And I really wouldn’t fancy that.
I’m taking him at his word for for his last comment. But as for  making money by sleeping with Wayne Rooney, some mistake surely. Rooney’s a ‘walk-over’ according to Jeremy’s editors and not the most grateful sleeping partner either. I’m assuming sleeping is a euphamism for something else. The most publicised incident of this nature involved Rooney handing over a miserable Ãƒâ€šÃ‚Â£35.50 in a Liverpool brothel I seem to recall. And he was not the first in the queue.
But, dare I say it,  a much easier way to make money is to front a syndicated BBC television programme called ‘Top Gear’,  and then for a couple of thousand a week pocket money write  columns for the Sunday Times and SUN, offering words of wisdom on subjects on which the only knowledge required is from reading the papers provided.
It certainly beats dunking yourself in the ocean off Australia for nineteen hours or off Indonesia for nine for that matter.
Maybe if one dunked the on-screen crew of ‘Top Gear’ in the Med off Ibiza they’d be shrieking like a line of BBC chorus girls after 15 minutes. This is only speculation as we know they’re all macho men do we not?
The BBC should therefore immerse them in the newly developed and open topped, would you believe, sQuba under-water sports car (below) in the sea off Cape Horn for a future programme.

But you just know it don’t you. They’ll steal the idea and dump them off St.Tropez or Puerto Banus and have 007 Jeremy wind down the window and drop out a fish, held between his thumb and index finger, in the unlikely event the car rises up onto the beach.
Jeremy and perhaps could also demonstrate in true Top Gear fashion just how to put on a condom under water in a new episode of Top Gear on underwater shift stick sex.
Still I like Clarkson, not because he thumped former Sun Editor Piers Morgan at the British Press Awards a couple of years back.

(The Sun apparently photographed him snogging his woman producer, which again is not a first. Done it myself I’m afraid. The penalties are greater than being photographed by the SUN)  but more because the BBC itself describes him as a man ‘not given to considered opinion’.
There’s a whole library of non pc quotes attributed to him.
I loved this I found in Wikipedia
During the 13 November 2005Top Gear episode, a news segment featuring BMW’s Mini Concept from the Tokyo Motor Show showcased what fellow-presenter Richard Hammond quoted as a ‘quintessentially British’ integrated tea set. Clarkson responded by mocking that they should build a car that is ‘quintessentially German.’ He suggested indicators that displayed Hitler salutes, ‘a sat-nav that only goes to Poland’ and ‘ein fanbelt that will last a thousand years.’

And there’s more:
In October 1998, Hyundai cars of Korea complained to the BBC about what they described as ‘bigoted and racist’ comments he made at the Motor Show in Birmingham, when he was reported as saying that the people working on the Hyundai stand had eaten a dog, and that the designer of the Hyundai XG had probably had a spaniel for his lunch.
He sort of grows on you doesn’t he?