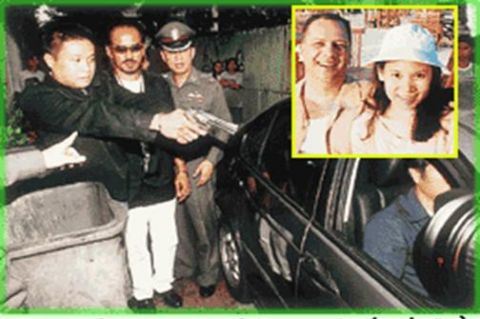 Some nine years after the murder of New Zealander Ian Travis in Bangkok the man once described as the mastermind behind the killing is behind bars in Bangkok Special prison.

But he was acquitted of conspiracy to murder in a trial which also received no publicity in Thailand.

In fact he was the first ever U.S. citizen to be extradited to Thailand and some senior Thai officials were slightly embarrassed that, after all the efforts to get him back, the case collapsed for reasons beyond their control.

Meanwhile a prison source said of Muller: ‘He is well liked by the guards and receives visits from his wife on a daily basis. He is comfortable and is biding his time until his sentence is up.’

A spokesman for the US Embassy said that Muller had been accused of an ‘economic crime’.

‘U.S. officials have checked on Muller to check on his safety and welfare.’

Ian Travis was gunned down as he drove his Mercedes out of Bangkok’s Sukhumvit Soi 8 in 2002.  He was shot five times by a Thai gunmen with an accomplice. He was Muller’s right hand man at FCI but decided to go it alone, walking off with boiler room clients lists to start up his own scam.

Police re-enact the killing. Muller and wife in insert
Up to that point Americans had lost over US$30 million to FCI according to papers lodged at the District Court in Atlanta, Georgia and the New Zealand Securities Commission said victims there had lost up to NZ$13m. Then of course there were the Australians.

Prior to the shooting ‘The Nation’ newspaper in Bangkok publish on January 23  2002 an advert placed by someone at FCI  suggesting Travis was a marked man.

The advert said it was safe ‘to come back’,  but to those in the business this simply translated  as it was not safe for 41-yr-old Travis if he did not come back.

FCI had offices in Asoke, where at its peak it had some 400 ‘openers’ and ‘loaders’ selling punters penny shares in companies tipped for success, or futures in petrol or currency. It was all a con. But not even all the staff knew it.

Some believed, as in the Hollywood film ‘Boiler Room’, starring Ben Affleck , Vin Deisel and Giovanni Ribisi, that they were actually selling genuine products, but those that did were not the smartest of the bunch.

Travis was from Eketahuna, in New Zealand’s north island, sometimes referred to as New Zealand’s ‘Timbuktu’. He himself apparently carried a gun and once was reported to have walked into FCI’s offices with a sub-machine gun.

Travis’ demise came after he tried to use the liberated cash and customer lists to set up the rival firm ‘Platinum Asia’.

It seemed like an open and shut case. At least that’s what the public were told.

And, as the Thai Rath cutting above shows, Lumpini Police in Bangkok even staged the reconstruction showing how the actually assassination was carried out.

Surawatpong Ratchadpirom, aged 28, was charged with the shooting and Sayant Piyawat, 46, with driving the getaway car. Police said they were Muller’s bodyguards, and were paid 240,000 baht ($13,000) to make the hit. This was allegedly conducted through his Muller’s Thai wife, Woranuch, and Muller’s head of security Chalit Sutichon, who allegedly supplied the gun to kill Travis.

A warrant was issued for Muller’s arrest but Muller had already fled to Costa Rica, one of his favourite stomping grounds.

On May 27 2003 the District Court in Atlanta, Georgia, ruled that Muller , who was arrested as he entered the US via Atlanta airport,  should be extradited back to Thailand on a charge of conspiracy to murder.

That decision was met with relief by a spokesman for Thailand’s Office of the Attorney General. The New Zealand Herald quoted a spokesman as saying:  ‘I was not sure the American Government was going to extradite its own people’, he commented, noting that Thailand had sent many Americans back to the US under the extradition treaty.

‘Since Thailand has extradited many people to the US, now its our turn,’ he added.

Meanwhile however the case against Muller had rapidly disintegrated in Bangkok.
The alleged hitman Sayan Piyawat, Muller’s former bodyguard, recanted his confession.

The Thai case collapsed after his extradition.  Muller, his wife , his head of security Chalit Sutichon and all were released.

He was able to tell me the address to which my car was registered, obtained in one short phone call, and warned me that I should be careful who I was dealing with as the company was working with high Thai police and army officials and people in high society.

Above: Chalit Sanitchon gives a warning before Tim Jones from Blackpool offers his advice
Tim Jones, from Blackpool, one of Muller’s ‘room managers’ was less polite. ‘Just f*ck off out of Thailand if you know what’s good for you’ he said, but a month later he rang and apologised and said he was leaving the boiler room.

Sutichon later became the manager at the Star Beach Condotel off Pratamnak Hill, Pattaya, a move many of the residents were to later regret.)

After his acquittal in Thailand, a good example of that now often repeated saying:  ‘There is nothing under the sun the Thai police cannot do’, Muller became re-united with many of his pals in the boiler room business in Bangkok.

And the story of what happened to Travis was racked up a notch so that almost every new boiler room boy today knows about it – and what can happen to them if they are even naughtier than their bosses.

Muller’s office off Sukhumvit 31
Muller recently boasted he had a yacht and a villa in the expensive  Laguna area on Phuket’s west coast. Meanwhile he opened up a martial arts centre in a sub soi off Sukhumvit 31 and had his Bangkok family home in Bang Khen, just south of the river.

His arrest and conviction came within a space of only a few months last year so there would have been a a guilty plea and some hard negotiations. The U.S. State and Justice department must have thought it had wasted their time and effort.

Muller, the hunted, has now become a man who receives U.S. Consular support though there is little evidence he needs it.

He is biding his time being a model prisoner and looking after his guards very well, say my sources, and perhaps waiting to enjoy his ill-gotten gains.

Ironically the prison complex at Lard Yao now houses a boiler room boss and some snitches too.

Meanwhile Muller is perfectly safe from his victims in the United States and Antipodes.