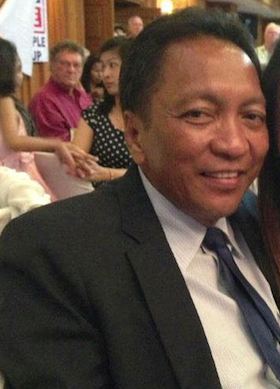 Well, you’re now fed up with foreign crooks in Thailand. One has taken you for a couple of million baht and you have had a confrontation with him and he’s not giving it back. So, you have called him a crook online to warn others. He’s come back and is now suing you for criminal libel under the Computer Crimes Act. 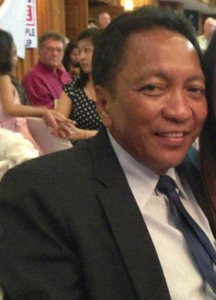 Problem is he’s the rich guy as he’s got all your money. But if you don’t fight you’ve lost everything. He’ll get up in court wearing a smart suit and tie, tell the court how his life has been ruined, that he gives to charity, and now even his children are being called names at school.

So, you need a lawyer? Here’s what not to do. Don’t Google ‘Honest Lawyer Thailand’. Don’t check the Ads in the Bangkok Post. And for heaven’s sake do not assume your ‘Embassy list’ lawyer is any way filled with ‘Honest Johns’, and don’t get one from ThaiVisa.com.

ThaiVisa.com by the way for those unfamiliar is the largest expat patronised English language website in Thailand. It’s in there for the money.

Finally, do not assume that because a lawyer speaks English and talks the talk, that he can walk the walk and is in any way honest. Assume that and he will walk off with your cash. He may have learned the language to be dishonest. Foreigners can be charged several times the fees offered to Thais.

Probably the most honest Thai lawyer I know told me:

“I did not want to practice law after a short while. Too money obstructions to justice.” (sic)

He is now a senior civil servant and separately an authority on organized crime.

Warnings given; now to the point. The latest lawyer to walk off with a client’s funds is none other than Somsak Chopaka, exposed on this site for helping boiler room fraudsters set up companies in Thailand through which they could launder the millions from their frauds on foreigners.

Somsak was ThaiVisa.com’s legal adviser to expats. Yes, I know this is hard to believe but ThaiVisa has yet to qualify as a responsible media organization and there are a lot of advertisers who should not be there.

In fact, Somsak has been struck off the law list once (a rarity in Thailand) but was re-instated on appeal.

He and his company were on the British Embassy’s legal list, but they were removed years ago after, but not necessarily as a result of, appearing on this site.

He remains on the U.S. Embassy list which appears to have been put together by some very shoddy researchers to this day – even though, when I last checked all Somsak’s law officers were closed (not answering phones) and his website had been removed from the net. (He is still on LinkedIn and other sites).

Somsak took a U.S citizen I shall call PB for a total of 4.5 million baht.

The citizen had gone to him for help in setting up a company and having done that Somsak asked him for a loan as he had a great business opportunity. The American provided the cash.

“I got contracts and thought everything would be fine because I had signed and sealed loan contracts. “Somsak said he had great business opportunities ahead and needed the money for development and new offices. Somsak never made any monthly payment as specified in contracts.
“He said he would settle cases (which would bring in all the cash) soon and then pay me. But then he said sorry the cases were under appeal. He was always postponing and postponing and always saying he is a lawyer and would never cheat me. What a sucker I was. I have attached the contracts as proof to the loans. I just want word to go out so no one else will get suckered.”

PB sent me the contracts and they are specific and straightforward loan contracts. So frustrated and convinced Somsak had no intention of paying PB hired another lawyer to take the matter to court. 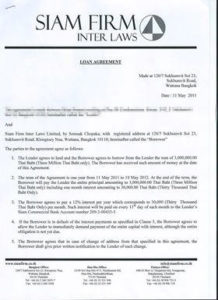 One of the loan agreements

“Somsak claimed he had no income and could not get in touch with me, as he didn’t have my phone number or address. Somsak lied, but the judge found him not guilty.”

PB has been trying to get another lawyer to take the case and subpoena Chokapa’s private account as he had heard from another disgruntled client who had also lost a lot of money to Chokapa that he too had been advised to pay Chokapa into his private account. He has been unsuccessful.

And even an honest lawyer I recommended described the task of a foreigner prosecuting a lawyer in a Thai court as rather challenging.

So, there you have it. Thai lawyers will defraud you. Your chances of winning are slim and there is a very good reason why Thailand has severe laws, equitable to lese majeste, for questioning the integrity of one of its judges.

Somsak and Siam Inter-laws remain on the website of the U.S. Embassy under ‘Citizen Services’.