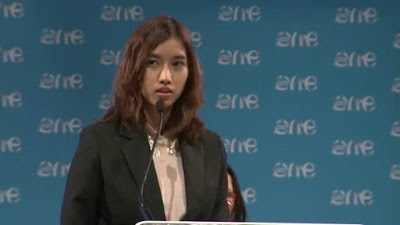 ALL THE WORLD’S A STAGE

There appears to be a growing protest on the internet at the hosting of a conference for ‘One Young World’ in Bangkok later this year.

One Young World of course is a group of youngsters or youth ambassadors who hopefully are going to put the world to rights.

Among the things they campaign for, ahem, is freedom of speech, something Thailand does not have at the moment, which is for the common good says the PM General Prayuth Chan-ocha..

A statement from them insists:

“Taking One Young World to Asia is a natural step after having hosted previous summits in Europe, North America and Africa.

One Young World is defined by its unswerving commitment to free speech; to providing the world’s youth with a platform to share and challenge the status quo without fear of censorship or oppression. This remains unchanged by our decision to take the Summit to Bangkok.

Our choice of host city is not to be interpreted as a political statement and we will do everything in our power to ensure the full representation for Thailand’s youth.”

Not surprisingly a lot of people are not quite accepting that statement and feel the conference should have been cancelled.

Among the counsellors listed to come to Bangkok are executives from Unilever and Siemens, and former Sinn Fein member and former IRA prisoner Sean Murray – who was named by the Sunday Times as officer commanding the Northern Sector of the IRA.  He is not liable to be a military junta sort of guy.

Delegates at the last One Young World conference last year in Dublin were treated to a speech by Phetchompoo Kijburana, who made no secret that she supported the PRDC – even turning up and giving speeches to ‘100,000 people’.

She said she joined the protest because the Shinawatras were trying to legalise corruption with the Amnesty Bill. True.

Having been educated at a private school in Oxford and now a student of political science at Durham University, Phetchompoo Kijburana is obviously from the more privileged classes of Thailand, which supported the protests and she asked the audience to understand why the military had to take over.

Since her speech the military have come down harder of course bringing numerous lese majeste charges and arresting students, throwing poor people off their traditionsl land as well requiring a change of attitude by many Thai citizens.

She says she wants to eradicate corruption, and describes the demos in 2013-14 as ‘the biggest uprising’ in ever seen in Thailand before.

Perhaps (moi aussi) she should have been more circumspect. She mentioned the 28 killed during the demos but did not mention the deaths of red shirts, not to mention the students killed by the Royal Thai Army in all the other ‘biggest uprisings’.

Having given up on its promise to reform the Thai Police, whose many claims to infamy include handling the stolen property, including the Blue Diamond, of the Saudi Royal family, it does not look like the army is going to reform itself.

And the two other major areas in most need of reform, the justice system and education have barely been touched, which is why many people now feel that this coup, as with all others, will serve mainly to enrich those in power.

The problem is that while people like Petchchompoo (Pink Diamond) can offer noble sentiments, and make the PDRC appear to a western audience to be the voice of the people, it’s very often their fathers and mothers who are most benefiting from corruption – (but I am not saying this personally in Petchchampoo’s case)

The meeting is not scheduled until the end of the year and a lot can happen before then.

What with the military being implicated in appalling human trafficking violations and continuing to hold military courts, and arresting people for voicing an opinion with a wrong attitude, it could turn out interesting.

“We are ready to host this event to change the world for the better,” said Petchchompoo optimistically.

The Bangkok Advisory Board of One Young World is a mish mash of privileged members of Thai society and includes for instance Sek Wanathamee, Foreign Ministry Press spokesman and the chairman of the executive committee of Siam Commercial Bank.

The Asia Director of One Young World is ‘Pearly’ Laksameekan Ingakul, daughter of the owner of the Miracle Hotel group,

And she is full of praise for Suthep Thaugsuban, who led the protest, and is not unknown for corruption himself.

Pearly is something of a socialite who can be seen at all the right dos. At Cape Panwa in Phuket she married Ditawat Issara – nicknamed Platu – Assistant Managing Director of Sales and Marketing and Assistant Managing Director of Business Development, Charn Issara Development Public Company Limited. I believe that one’s in the family. The picture above is a publicity picture for the event.  God these people are suffering.

“During the Summit we have planned for you to indulge in the most exquisite and authentic of Thai foods from all across the nation and the opening ceremony that we have planned is in a word, breathtaking. Imagine cruising along Bangkok’s main river with an explosion of Thai culture for you to witness.”

How nice. And yes I certainly can. But I am sure she has time to come and finish the season here first,