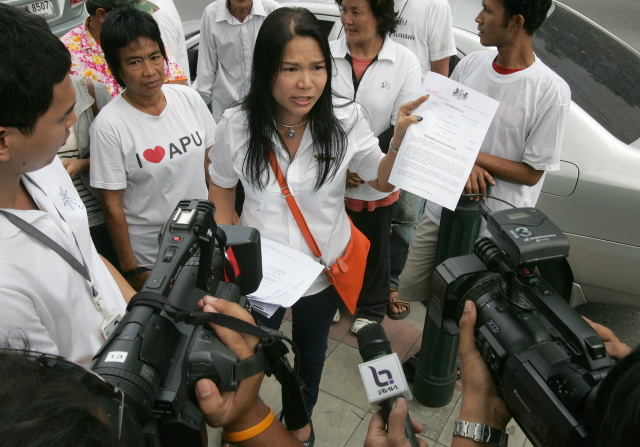 Angry demonstrators rallied outside the British Embassy today as a Thai woman married to a retired Scottish kilt-maker threatened to kill herself outside the mission on St. Valentine’s Day.

Supporters gathered around Kanokrat Booth, 42, waving banners saying ‘Stop Judging Thai People’ and ‘Marriage is not a love service and needs no probation’ after Mrs. Booth was again turned down for entry to Britain to fight human rights and divorce cases.

Kanokrat Booth was arrested and deported when she arrived at Glasgow airport in May 2010. Her husband Denis Booth, 67, a retired kilt maker from Galashiels, had tipped of the U.K. Border Agency to say that his Thai wife had deserted him and had another lover.

But this month despite the Immigration Tribunal rulings and an acceptance of her case by the European Court of Human Rights the Border Agency refused her visa again.  She had applied for a spouse visa, but the U.K.B.A said as she had no intention of living with her spouse her application was not valid.

Said Mrs.Booth: ‘The UK is killing me by their laws.  My life is already dead. All I want to do is fight my divorce and my human rights cases in Britain.  When I have finished the authorities can stamp my passport red and say I am a person they do not want.  I do not want to stay in the U.K.  I love Thailand.

‘All I am asking for is basic human rights. If they (the Embassy) do not give me an answer I will kill myself with a knife.’  She said she would return to the Embassy on February 14th St. Valentine’s Day.

‘I have spent Ãƒâ€šÃ‚Â£100,000 fighting my case. I have had to sell my house and car. But I am being treated like a prostitute by the British government, but I am the one who is paying them almost a thousand euros when I apply for a visa.’
Mrs.Booth is the author of a book called: ‘Miracle of Love- My husband comes from the wrong button!’

She met Denis Booth, 68, on the internet, and they went through a Buddhist ceremony in Thailand, a hotel wedding in Bangkok, and a registry office wedding in Galashiels.  He later complained to her that he had clicked on the wrong button on the dating website.

She denies ever having another lover and said she only returned to Thailand when her husband went on sailing holidays to Turkey.  On February 14 2010 Denis had sent her his valentine love, but within three months he had asked the U.K.B.A to refuse her entry.

She wants to contest the grounds for divorce at Selkirk Sherriff Court and be allowed to remain in Britain to sue the U.K.B.A.